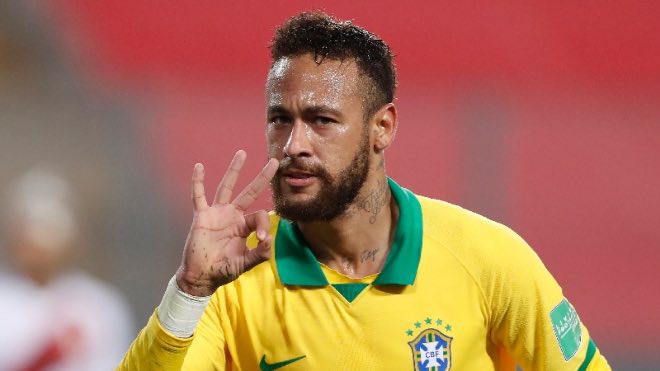 On Tuesday, Neymar’s hat trick helped Brazil win 4-2 over Peru and a place at the top with Argentina in the South American qualifying stage for the World Cup. Neymar has scored a brace from the spot and got the third goal in the added time of the match.

After thrashing Bolivia 5-0 in Sao Paulo last week in its first game, Neymar’s Brazil tops their group with a better goal difference than the rival teams.

In the sixth minute, Peru began to display its offensive style by taking advantage of André Carrillo’s right-foot volley from the edge of the box. It became his third goal in South America’s World Cup Qualifiers stage, after a double in the match against Paraguay, which ended in a 2-2 draw.

Brazil stabilized and kept on attacking Peru’s goal and Neymar’s inevitable appearance throughout the box enforced a first penalty, which was calmly converted by the star player himself in the 28th minute.

After the break, the Brazilian forward continued their intensity and failed to convert chances. However, the shot from Renato Tapia, deflected by Rodrigo Caio, led Peru to their 2nd in the 59th minute. But, Richarlison soon made it 2-2.

Pressure from Brazil resulted in a second penalty in which they returned to Neymar and the Brazilian forward didn’t disappoint the fans as he scores his 2nd to take his total goal tally to 63rd goal for the National team to surpass Ronaldo who has won two World Cups. Just renowned Pelé ahead of Neymar, Pele has scored 77 goals.

Neymar got his 3rd goal of the match in the added time to complete his hat-trick.