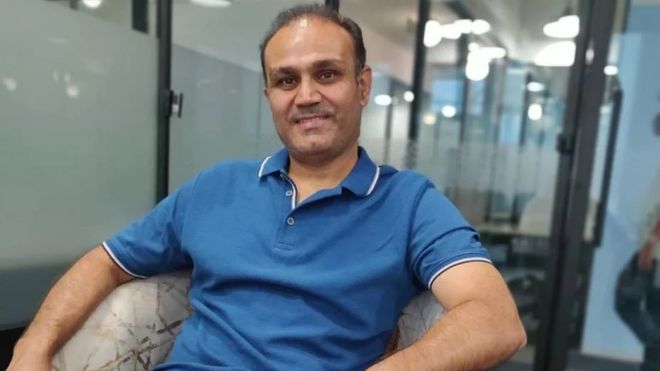 Nobody helped me !: Virender Sehwag opens up about his initial struggles with foot movement

In Indian cricket, the name Virender Sehwag is synonymous with greatness. The explosive batsman from Delhi is one of the greatest cricketers of all time and his name is forever etched into history. However, during his initial days, he struggled with his foot movement towards the ball.

This is one problem that Sehwag had especially when encountering the away swing of the new ball. But even despite that, he managed to average 50+during his test career which is astonishing. Now he has opened up about how everyone indicated his problems but nobody told him the solution.

Speaking with the Cricuru App Sehwag lamented on the lack of guidance he had. He says even he wanted to improve but nobody told him how.

“Everyone said I need to improve my foot movement but nobody had the answers how,” he said.

However, he named three cricketers who came forward and helped him correct his foot movement. Sunil Gavaskar, Krishnamachari Srikkanth and Mansoor Ali Khan Pataudi came ahead.

“But by the advice of Mansoor Ali Khan Pataudi, Sunil Gavaskar, and Krishnamachari Srikkanth to stand on middle-off instead of leg stump helped me a lot,” Sehwag said.

Moreover, Virender Sehwag also added that he learnt a lot from watching Sachin Tendulkar play. He says that watching Tendulkar play in the 1992 World Cup, he learnt how to execute the perfect straight drive.

“Cricket is played on the ground but a lot can be learned. If I give my own example, I started watching cricket from the 1992 World Cup and at that time used to watch (Sachin) Tendulkar and copy him. How he plays the straight drives, how he plays the back-foot punch… In 1992, if I could watch TV and learn a bit, why not,”  he added.