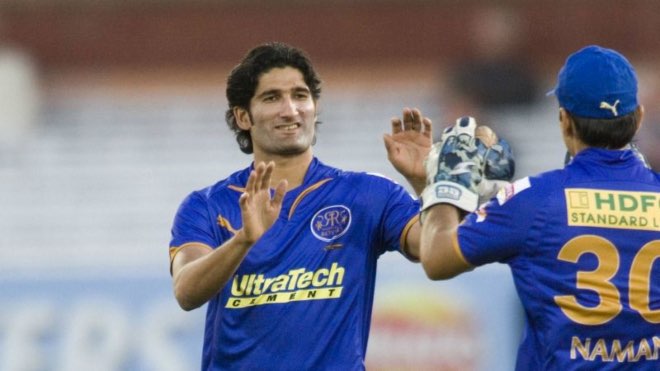 On this day playing for Rajasthan Royals in Indian Premier League (IPL), Pakistan’s Sohail Tanvir bowled a red hot spell during the match against Chennai Super Kings at the Sawai Mansingh Stadium in Jaipur in which he took 6 for 14 – the best figures in Indian Premier for 11 years.

Tanvir took three in his first spell and then came back to fetch three more, all adding up to figures of 6 for 14.

First wicket – Parthiv Patel: There were swing and bounce, perfect condition for the pace bowlers and Sohail Tanvir exploited it. Parthiv Patel played across the line and missed an incutter ball hitting his pads. Parthiv Patel was gone for a duck on the first ball of the match.

Second wicket – Stephen Fleming: Four deliveries later Tanvir sent back Fleming to the pavilion for a duck similarly to Parthiv Patel. An inswinger to Fleming hitting on his pads.

Fourth wicket – Albie Morkel: Tanvir came back in death overs, just as in his first spell, Tanvir struck with the first delivery of his second spell, this time Morkel was bowled as he slogged across the line.

It was extraordinary figures which stood over a decade till 2019 when Alzarri Joseph playing for Mumbai India took 6 wickets for 12 runs in 3.4 overs in a match against SunRisers Hyderabad at Rajiv Gandhi International Cricket Stadium, Hyderabad.