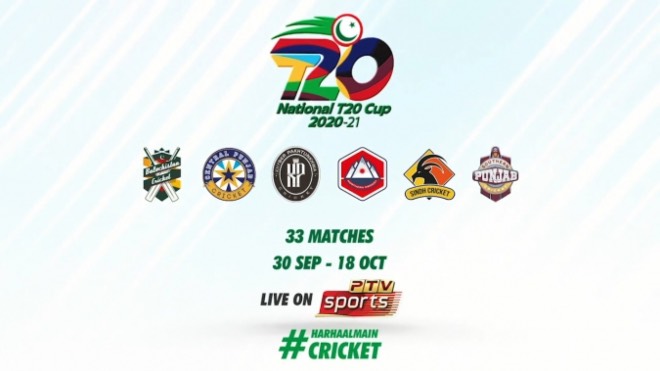 Pakistan’s much-awaited National T20 Cup First XI tournament kicks off on September 30 at the Multan Cricket Stadium. The 33-match tournament, which will be broadcast live in its entirety in High Definition on PTV Sports, marks the beginning of competitive cricket in the country after more than six months and, as such, serves as the curtain-raiser for the 2020-21 domestic season.

The tournament will be played in two phases: the first one running from 30 September to 6 October in Multan and the second phase to be staged from 9-18 October in Rawalpindi.

With two ACC Asia Cups and ICC Men’s T20 World Cups scheduled for the next two years, this year’s National T20 Cup First XI tournament will be played on a double-league basis to provide adequate preparation to the players who are likely to represent the Pakistan men’s national team in these events.

The tournament also provides an opportunity for the country’s best short format cricketers to impress the national selectors and, also, the HBL Pakistan Super League franchise owners and management ahead of the Player Draft for the 2021 season, which is scheduled to be held in November.

With a coveted trophy and total prize money of PKR 9 million on offer, Northern, who will be led by Shadab Khan until their captain Imad Wasim (currently engaged in the Vitality Blast T20 tournament in the UK) joins the side in Rawalpindi, will be eager to defend their title.

And, the other five teams will be fighting tooth and nail to secure berths in the final of the tournament, which will be played at the Pindi Cricket Stadium on 18 October.

Balochistan will aim to take the next step after they ended as runner-up in the last edition of the tournament, while Khyber Pakhtunkhwa and Southern Punjab, who managed to reach the semi-finals, will be keen on bettering their last performances.

Central Punjab and Sindh will be under special focus as their last National T20 Cup, played at Faisalabad’s Iqbal Stadium, was cut short for their failure to qualify for the semi-finals.

In the Multan-leg Central Punjab will be led by Saad Nasim, Central Punjab’s regular captain Babar Azam will join the side for the Rawalpindi-leg.

The National T20 Cup for the Second XIs will be played at the Lahore’s Gaddafi Stadium, Pakistan’s home of cricket, from 1-8 October. The tournament will be played on a single league basis to increase competition amongst the six Cricket Association Second XI teams as they will aim to put their foot on the gas from the outset.

This tournament will further help the First XI teams gauge their up and coming cricketers from their Cricket Associations and, as such, will serve as a pathway for the players to graduate to the top domestic level.