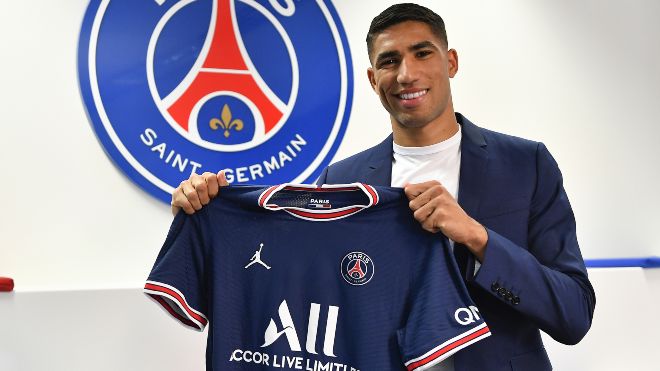 French club Paris Saint-Germain are upping the ante this season as they make yet another signing to add to their artillery. The French club has signed up right-back Achraf Hakimi from Inter Milan on a five-year deal.

PSG had to battle with Premier League club Chelsea who also wanted to add Achraf Hakimi. Manager Thomas Tuchel was interested in the player. However, Paris Saint-Germain have managed to convince Achraf Hakimi to come their way.

Inter Milan were facing a severe cash crunch and hence had to sell Achraf Hakimi. The reported price for Hakimi is said to be £60 million. However, the club has decided that they won’t put striker Romelu Lukaku up for sale.

“I feel a lot of pride today. After my experiences in Spain, Germany and Italy, Paris Saint-Germain offers me the opportunity to discover a new championship under the colours of one of the most prestigious clubs in the world,” said Hakimi.

“I can’t wait to meet my new teammates, the fans and feel the extraordinary fervour that reigns at the Parc des Princes. I share the same very high ambitions with the staff and the players and will do everything to give my club what it expects of me,” he added.

It is very clear that Paris Saint-Germain have high aspirations this season. After the disappointment against Manchester City and Bayern Munich in the last two seasons, they will be looking to make sure they can add Champions League glory this time around.

The club has already signed the likes of Gini Wjinaldum, Sergio Ramos and Gianluigi Donnarumma and now Achraf Hakimi. These are some high-quality players who can lead them to the title.

Furthermore, Paris Saint-Germain have also renewed the existing contract with Brazilian superstar Neymar Jr. Now all that remains is to convince Kylian Mbappe to extend his stay as well.

“The signing of a player of this stature shows the level of our ambitions. We continue to build something very special,” said PSG President Nasser Al-Khelaifi.

“Achraf is only 22 years old, but he’s already established himself as one of the best full-backs in the world of football, and that’s the standard we set for ourselves at the club,” he added.

“I know Achraf will have a fantastic career with us and the whole club wish him every success under our colours,” he said.