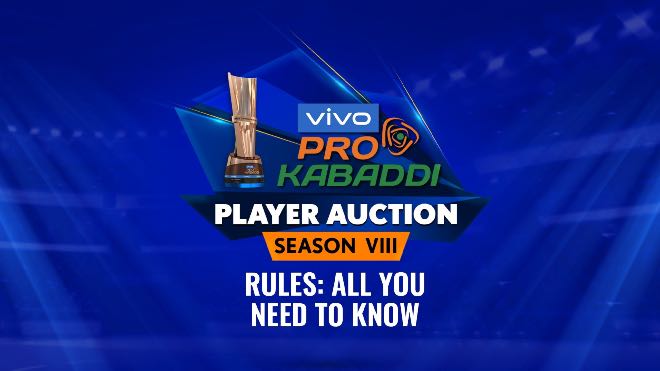 The Pro Kabaddi 2021 player auction (PKL 2021 Auction) is set to take place from August 29 to 31, which will give the 12 franchises a chance to rebuild their squad over the three-day affair.

The teams released 161 players in all with 59 retained for Season 8. But before fans get to see who their teams’ new superstars will be, lets take a look at some of the Pro Kabaddi 2021 Auction rules.

Who will be in the Player Pool?

The Pro Kabaddi 2021 auction pool has more than 450 players who will go under the hammer. The pool comprises the released players along with kabaddi players from the domestic level. This includes squad players from PKL Season 6 and 7, those coming through the New Young Players (NYP) programme and the top eight ranked teams of the senior national kabaddi championships of the last two seasons. Overseas players will also be in the auction pool.

What is the maximum squad size of a team?

What is each team’s player purse during the Pro Kabaddi auction?

Teams have a total player purse of INR 4.4 crore to use for buying players. A player’s salary for the season is determined by the maximum bid placed on the player. This purse, however, will be smaller with the number of retentions a team makes ahead of the auction.

What are the player categories and base prices?

Domestic players are further divided into categories. There are four categories that players can be a part of (A, B, C, D). Players in Category A have the highest base price of Rs 30 lakhs; B is Rs 20 lakhs; C is Rs 10 lakhs, and D is Rs 6 lakhs. Each player will come with his skillset – raider, defender or all-rounder.

How many overseas players are allowed in a Pro Kabaddi squad?

Each team must have at least two and a maximum of four overseas players in their squad.

Elite Retained Players: How does it work?

Each team can retain a maximum of six players who aren’t categorised under the NYP bracket before the auction. Teams can choose to retain their top performers so that they won’t risk losing them to others who may bid a higher price for them in the auction.

New Young Players: Who are they?

What is the Final Bid Match?

The Final Bid Match rule allows teams to match the final bid on players from the pool who were a part of their squad in the previous season.