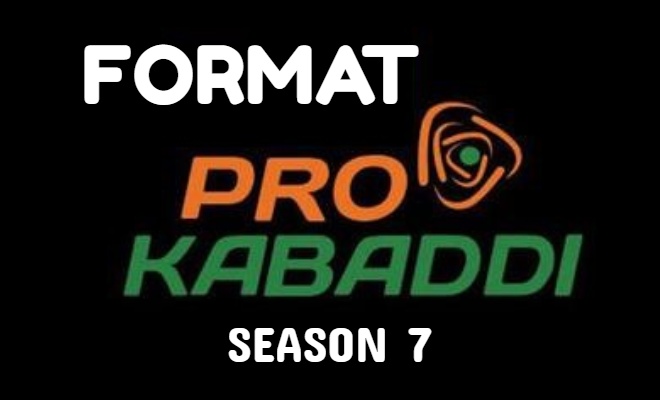 Season 7 of Pro Kabaddi League will start from 20 July 2019 and there are certain changes made in the format this season, so let’s look at the tournament format:

Each team will have a home leg, where they will play four matches on Saturdays, Sundays, Wednesdays and Friday with Tuesdays serving as a rest day for all 12 legs of the league stage.

Hyderabad will host the opening leg of the new campaign, followed by which the action will move to Mumbai. Pro Kabaddi League Season 7 will also see the return of Pro Kabaddi action in Jaipur and Bengaluru after a two-year absence. The final leg of the campaign will be held in Greater Noida and will be followed by a two-day gap before the start of the Playoffs.

At the end of 22 matches for each team, the top six teams are decided based on the total number of points earned. Then top six teams play Playoff Stage. The top two teams at the end of the league stage will qualify for semifinals (semifinal 1 and semifinal 2). And the four other sides that make it to the Playoffs will battle each other in Eliminator 1 and 2 to decide who advances to the semi-finals.

The winner of semifinals 1 and semifinal 2 will play the final on 19 October 2019.