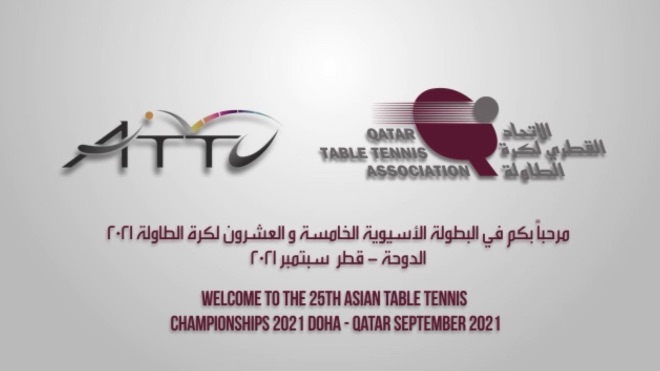 Qatar will host the Men’s and Women’s Asian Table Tennis Championships in September 2021.

On Thursday 17th September at the Extraordinary Congress of the Asian Table Tennis Union, held on-line, the unanimous decision was to award the 2021 Asian Championships to Qatar.

Once again, the country’s capital is the host; it is destination Doha. Exact dates and name of the venue will be advised in due course.

Notably, the city that has welcomed all the great players of the modern era without exception. Moreover, it has hosted more ITTF World Tour tournaments than any other.

State of the art facilities, setting an example for the rest of the world, for over a quarter of a century that has been the situation in Qatar, the national association under the leadership of Khalil Al-Mohannadi has gained the confidence of all.

Khalil bin Ahmed Al Mohannadi, President of QTTA and Arab Table Tennis Federation, said, “We will have the honour to host the best players of the region especially the ones from East Asian countries like China, Japan, India, Hong Kong, China Taipei and South Korea. So it will be like a mini-world championship.”

“We are very happy with the honour that the State of Qatar has been chosen as the hosts for the second time. I thank the members of the General Assembly for choosing us after China and India quit the race,” he added.

Al Mohannadi expressed the hope that the new generation of Qatari table tennis players will benefit from this historic hosting.

”I am confident that our youth come will into contact with the best-ranked players in the region,” Al Mohannadi, who is also the First Vice Presidents of the Asian and International Table Tennis Federations, said. “Also, it will be another opportunity for Qatar to host yet another world-class event. We have the top-notch sporting infrastructure in Qatar,” he added.

The next Annual General Assembly of the ITTF will also be hosted in Doha during the same week as the tournament. The ITTF executive committee is due to hold its next AGM online on September 28.

In 1994, Doha announced international arrival, when Korea Republic’s Kim Taeksoo won the men’s singles event at the inaugural Qatar Open; in 1997 the tournament joined the ITTF World Tour and since that date, with the exceptions of 2000 and 2004, has been ever-present on the calendar.

Furthermore, in 2016, Doha hosted the ITTF World Tour Grand Finals and Star Awards Evening, having earlier in 2004 being the home for the World Team Championships.

No stranger to world events and no stranger to continental gatherings. In 2006 the Asian Games were held in Qatar; now the Asian Championships return, in 2000 the prestigious tournament was held in Doha.