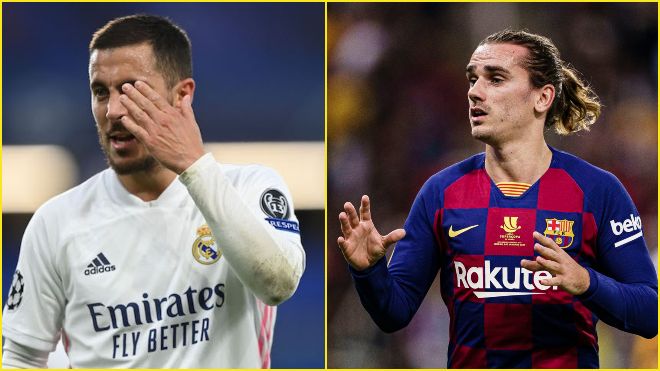 Real Madrid CF have offered Eden Hazard back to Chelsea after two seasons of signing him. The Belgian star left Chelsea after seven illustrious years in London to join the Los Blancos but his time in Spain has been peppered with injuries.

So far in two years, Eden Hazard has managed to make only 43 appearances in a Madrid shirt. Part of this can be accredited to Real Madrid’s extremely poorly managed fitness centre which has unable to properly attend to his injuries.

This has been the cause of Belgium wanting to treat Hazard at their facility ahead of the UEFA Euros. Now according to reports, Real Madrid will be willing to let go of Eden Hazard for a fee in the range of £50-55 million.

Antoine Griezmann has been offered a to Premier League clubs Tottenham Hotspur and Manchester City. Earlier a swap deal between FC Barcelona and Atletico Madrid was in place for Saul Niguez but that has not progressed.

Manchester City’s first aim remains Harry Kane which would mean Tottenham Hotspur will need a striker and can eye Antoine Griezmann. However, Spurs are also in talks with Southampton’s Danny Ings.

Although FC Barcelona have contacted several clubs for the transfer of Antoine Griezmann, the Frenchman is still adamant to stay. The only situation where he would like to leave Camp Nou is if he can return to Atletico Madrid.

On the other hand Merseyside club, Liverpool also remains interested in Atletico Madrid’s Saul Niguez. There are major doubts about the future of club captain Jordan Henderson’s future with Portuguese Renato Sanches being linked.