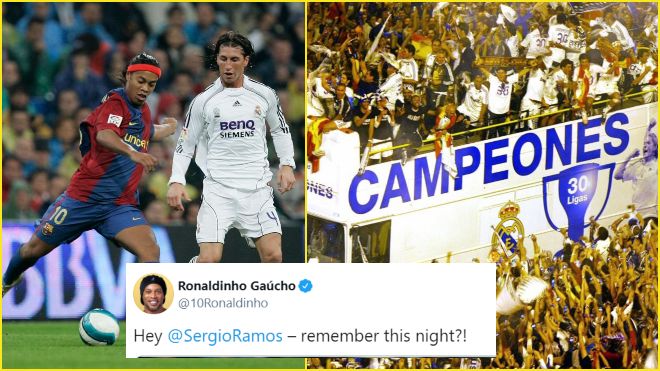 Real Madrid have parted ways with their long-serving captain Sergio Ramos. The Spanish club announced on Wednesday that it will be parting ways with the Spanish international after almost 16 years at the club.

Sergio Ramos is one of the most illustrated and decorated players at the Spanish club. He captained his side to three consecutive UEFA Champions League glory from 2016- 2018. Moreover, he has also lead them to the UCL win of 2015 with his last-minute header against Atletico Madrid.

However now Real Madrid has decided it’s time to part ways and start fresh. Earlier Sergio Ramos had said that even if he had to take a salary cut he would stay at the Bernabeu. Looks like that wasn’t all true.

Ronaldinho tries to troll Ramos and it backfires

Upon announcing his departure from Real Madrid, many footballers came forward and congratulated Sergio Ramos. Amongst this former Barcelona star, Ronaldinho tried to troll Ramos by posting a picture of him dribbling past Ramos.

While Ronaldinho thought he was posting a picture from Barcelona’s 3-0 win over Madrid in the 2005/06 season, in reality, it was from the 2006-07 season wherein Madrid had won the league. Moreover, Ramos had played a crucial role in that 2-0 win.

Real Madrid eventually went on to win their 30th La Liga title and this victory was important in that. Sergio Ramos hence took the opportunity to remind Ronaldinho of that win.

He was quick to point out the mistake and posted a picture of Madrid’s victory rally in his reply! Ramos said to Ronaldinho he did remember the earlier picture but this was much better.