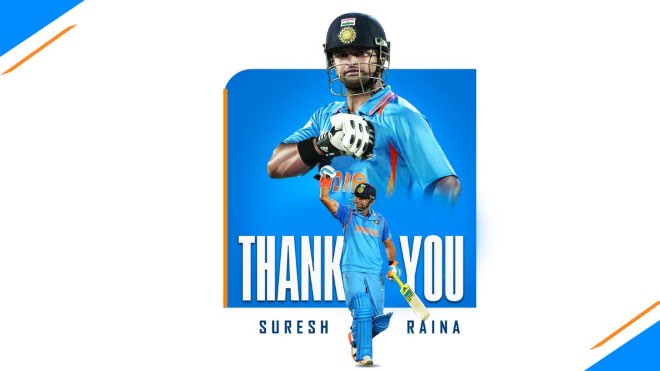 “A world-class fielder and a useful bowler, Raina represented India in 18 Tests, 226 ODIs and 78 T20Is in an international career spanning 13 years,” BCCI said in the statement.

“A member of the victorious World Cup-winning team in 2011, Raina first made his international debut at the age of 18 and also led India in ODIs and T2OIs when he turned 23. He is the youngest to lead an India men’s T20I side and was also a member of the side that played in India’s first-ever T20I. The southpaw is also the first Indian to score a century in the T20 World Cup,” the statement added.

“Under his captaincy, India registered a 3-2 series victory in West Indies and a 2-0 win over Bangladesh in ODIs and a 2-0 T20I series win in Zimbabwe,” the statement further read.

“Raina, who scored a century on debut in Tests, is also the first Indian to have hundreds in all three formats of the game and his centuries were scored outside India,” the statement added.

“With his mentor MS Dhoni, he formed a lethal batting partnership. Often coming together in crunch situations, the two helped India cross the finish line. Together they scored 2421 runs for the fifth wicket, the most by a pair in ODIs for that wicket,” the statement read.

BCCI President Sourav Ganguly said, “Suresh Raina has been one of the key performers in limited-overs cricket for India. Coming lower down the order and playing some of the match-winning knocks requires a lot of skill and talent. He along with Yuvraj Singh and MS Dhoni formed a solid middle order for India in ODIs. I wish him and his family all the very best.”

BCCI Secretary, Jay Shah said, “Suresh Raina has been arguably one of the finest T20 batsmen. A live wire on the field, Raina’s prowess as a left-handed batsman was exhibited throughout his cricketing career. A big match player, Raina’s cameo against Australia in the quarterfinal in the 2011 World Cup was a testimony to his glittering career that followed. I wish him all the very best in the second innings of his career.”

BCCI Treasurer Arun Singh Dhumal, said, “I would like to congratulate Suresh Raina on the phenomenal career that he had for Team India. An exceptional fielder and a match-winner, Raina was a treat watch in white-ball cricket. Your energy and skills will be missed. I wish you all the luck in your future endeavours.”