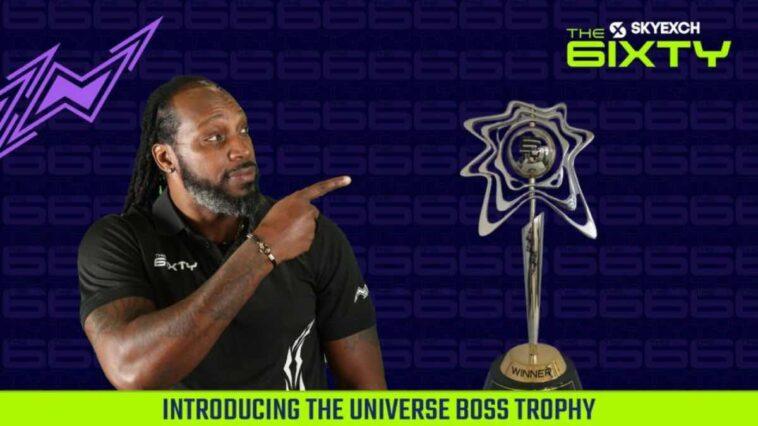 THE 6IXTY announces Chris Gayle as the Brand Ambassador; opts out of CPL 2022

On Monday, THE 6IXTY announced that Chris Gayle will be the Brand Ambassador for the new 60-ball tournament which gets underway in St Kitts & Nevis on 24 August 2022.

The Caribbean Premier League (CPL) and Chris Gayle have confirmed that he will not play in CPL this year (CPL 2022), to concentrate instead on THE 6IXTY for the 2022 season.

Gayle said, “I am going for the shorter format this year. I am genuinely excited about the current innovations in the 6ixty and seeing how they play out. In particular, I am looking forward to the mystery team ball and hitting two sixes in the first 12 balls to unlock a third PowerPlay over.”

Gayle, the self-proclaimed Universe Boss, will be playing in the tournament and will be acting as host for the six teams. Gayle has the most runs, most hundreds, most sixes and the most scores of fifty or more in T20 cricket so he perfectly suits Cricket’s Power Game.

The tournament will feature six men’s teams and three women’s teams who will be fighting for their version of the Universe Boss Trophy, named in Chris Gayle’s honour.

Gayle has been working with the tournament organisers to develop this innovative and exciting format.

CWI President, Ricky Skerritt said, “Chris has been the most prolific run scorer in white ball cricket and has served West Indies outstandingly well in all versions of the game. The 6IXTY is a perfect way to pay tribute to Chris and to thank him for his many years of his entertainment of CPL and West Indian fans everywhere.”

Pete Russell, Hero CPL’s CEO, said, “Chris Gayle has been such a huge part of the CPL’s success, and we are delighted he has agreed to be a big part for this exciting new opportunity Caribbean for cricket. There is no one who better represents Cricket’s Power Game, and partnering with him for this event is hugely exciting. We can’t wait to watch Chris smash even more sixes at The 6IXTY.”