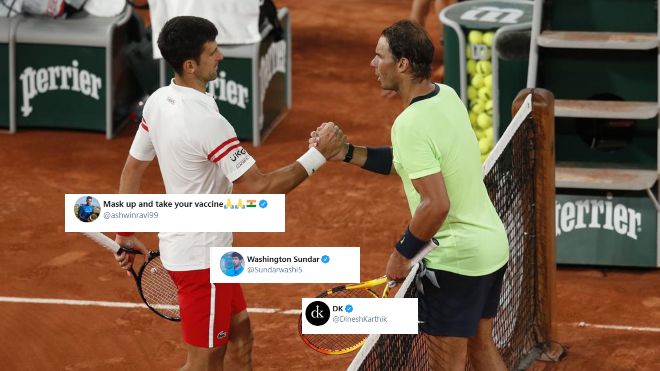 This is not just tennis!: Indian cricketers are astonished after seeing Nadal vs Djokovic

Novak Djokovic created history after defeating Rafael Nadal in the Roland Garros semifinals on Friday. The Serbian came from behind to do the impossible – defeat Nadal on clay. The Spanish superstar who is an undisputed champion on the clay turf has finally been defeated.

Djokovic defeated Nadal 3-6, 6-3, 7-6(7/4), 6-2 to reach the final in a match that lasted 4 hours and eleven minutes. He will be facing Greek player Stefanos Tsitsipias in the final now.

In a game that left the world gasping for breath, many Indian cricketers took to social media to reveal their reactions. Ravichandran Ashwin, Washington Sundar and Dinesh Karthik were all left spellbound!

“This is not just tennis! This is bench marking of the highest order. #NovakvsNadal,” said Ashwin.

On other hand, Dinesh Karthik said this match symbolises ‘not giving up’.

“Not bad” isn’t gonna get it done tonight, it better be GREAT. What an unbelievable game of tennis happening tonight #NadalVsDjokovic,” he tweeted.

“Nadal losing the semifinal at Roland Garros after being one set UP. Bizarre Times! Inhuman effort for every single point though,” he said.

This is Rafael Nadal’s first defeat in 14 semifinals at the French Open. With this win, Serbian international Novak Djokovic remains in contention of winning his 19th Grand Slam Title. Moreover, he can become the first man in 50 years to win all the grand slams twice.