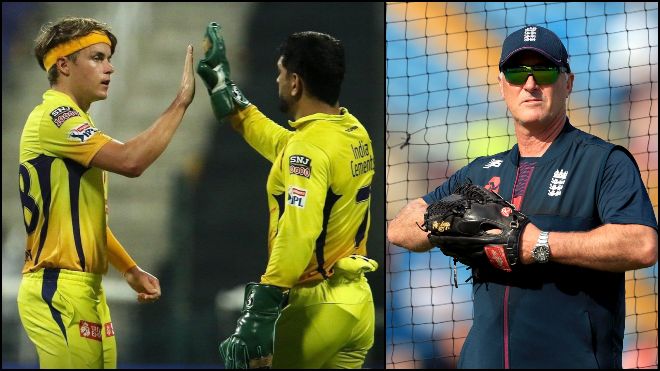 Former England Player and current stand-in head coach Graham Thorpe appreciated Sam Curran and said that playing for Chennai Super Kings in IPL has helped him a lot to improve as a player. Curran is the part of Chennai since IPL 2020 and he cemented his crucial place in the team with his phenomenal performance for the franchise.

“I think it’s (IPL) helped him enormously. Every environment Sam has gone into, he’s shown that ability to compete and an ability to find a way of putting performances in. From that perspective, playing in the IPL has put him in high-pressured situations and pushed him,” Thorpe was quoted as saying by ESPNCricinfo.

He also praised Curran’s way of game and mindset, “His hitting ability with the bat was always there. I think that’s progressed to a really good level. He’s bowling at important times in the IPL, so he’s put under pressure and challenged. At 23, he’s getting some really good experiences.”

“When he comes back and plays with England, he’s having to challenge for a place so he’s being put under pressure there too. That’s not a bad thing. One of his great personality traits is that he’s a real competitor. We have seen that ever since he was a young lad, and his skill level is going up. For a 23-year-old it’s a good place to be. We want him to keep getting better and better,” he concluded.

Curran in recent has been a crucial player for England. His all-around abilities with both bat and ball are helping the English team in all formats. In the 3rd ODI against India in March, he played a valiant inning which nearly clinched a sensational victory but in the end, it all went in vain. Curran’s innings were appreciated by everyone. A few days ago against Sri Lanka, he got his maiden 5-wicket haul in 2nd ODI at his home ground, The Oval in London.