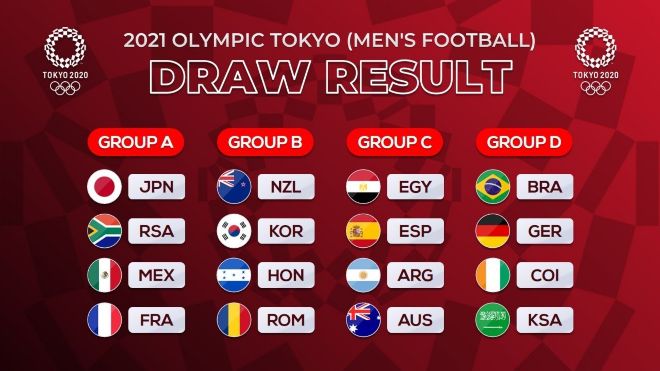 Tokyo Olympics Games 2020: All you need to know about Men’s Football

The Tokyo Olympics is starting soon and football fans will be treated to some more action after an amazing season of UEFA Euros 2020 and Copa America. The men’s football competition at Tokyo Olympics will be starting on July 22nd and end on the 7th of August.

A total of 16 teams are participating in the tournament which includes the likes of big names of Argentina, Brazil, Germany and France along with hosts Japan. The rest of the teams are – Spain, Mexico, South Africa, Honduras, South Korea, New Zealand, Romania Australia, Egypt, Ivory Coast, and Saudi Arabia. This is the 27th time football will be featuring in the Olympic games.

According to Olympics rules, countries are to send in U-23 players to represent along with 3 overage players. Those born on or after January 1, 1997, have been selected in the respective teams for the Tokyo Olympics.

The men’s football will be played in a round-robin format. The 16 teams will be divided into four group’s consisting of four teams each. From these four groups, the top two teams will progress through to the quarter-finals.

Venues for the tournament

A total of seven venues have been selected for the Men’s Football across six cities at the Tokyo Olympics 2020. These seven stadiums are in the cities of Kashima, Rifu, Saitama, Sapporo, Tokyo, and Yokohama.

The final of the tournament will be played at the Olympic stadium in Tokyo on the 7th of August.

Timings and streaming options in India

The football matches will be played between 1 pm and 5 pm according to IST (Indian Standard Time). A total of eight matches is supposed to be played per day.

The matches can be live-streamed across the Sony sports network. Moreover, you can also watch online on the SonyLiv mobile application along with on the website.