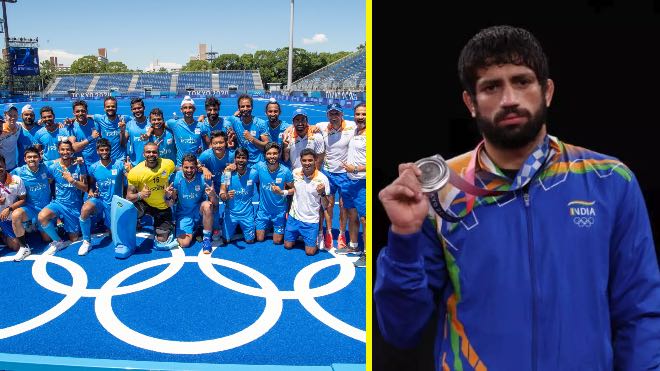 After a long wait of 41 years, India’s men’s hockey team finally has their hands on an Olympic medal. In a rollercoaster tournament, India have finally finished on a high as they defeated Germany by 5 goals to four to clinch the bronze medal at the Tokyo Olympics. Belgium won gold whereas Australia gets silver.

Simranjeet Kaur was in scintillating form as he scored two goals. In addition, Hardik Singh, Harmanpreet Singh and Rupinder Pal Singh too got a goal each. In an emotional moment, the Indian players burst into tears at the end of the final whistle.

” I did not come to Tokyo for a silver medal. It will not give me satisfaction. Maybe this time I deserved only a silver because Uguev was a better wrestler today. I could not achieve what I wanted to. His style was very good. I just could not find a way to play my game. I don’t know what I could have done. He wrestled very smartly,” said Ravi Kumar Dahiya.

In other events, Deepak Punia lost his bronze medal match in the men’s freestyle 86 kg category. Punia lost against Myles Amine of San Marino. Vinesh Phogat too lost in her quarterfinals match against Belarus’ Vanesa Kaladzinskaya in the 53kg category.