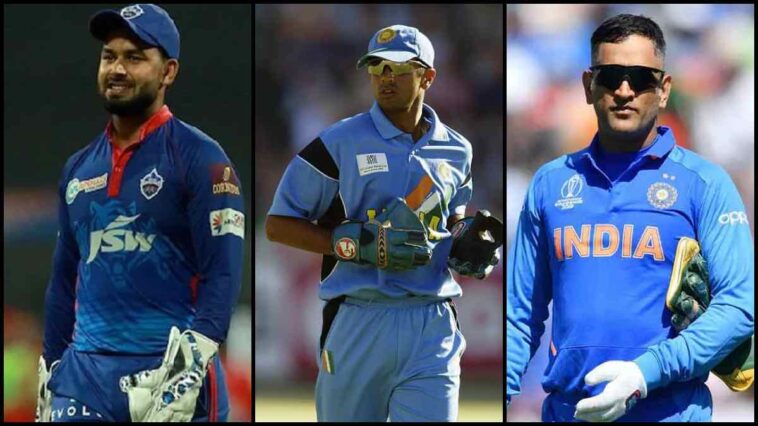 One of the most crucial responsibilities in cricket is keeping wickets. By taking important catches and putting a halt to runs, a great wicketkeeper can be highly effective in his team’s victory. In India, we have had some great wicketkeepers over the years. In this post, we will discuss the Best Indian Wicket-Keepers of all time.

The first name that comes to mind when we think of the best Indian wicketkeepers is Mahendra Singh Dhoni. Dhoni is one of the most successful captains in cricket history and is also one of the greatest wicketkeepers of all time. He has been a part of some of India’s most successful teams and has led them to many victories. Dhoni is also known for his calm and composed demeanour behind the stumps, which has helped him in difficult situations.

Another great Indian wicketkeeper is Syed Kirmani. Kirmani represented India in 88 Test matches and was a part of the team that won the 1983 Cricket World Cup. He was known for his sharp reflexes and safe hands and was also a very good batsman. Kirmani is considered one of the finest wicketkeepers in cricket history.

Nayan Mongia is one of the best Indian wicket-keepers of all time. He played for India from 1992 to 2000 and captained the side in 11 Tests and 15 ODIs. He was a very reliable batsman, scoring over 1,400 runs in Test cricket, and was also known for his excellent work behind the stumps. In his career, he took over 200 catches in Test cricket and effected over 100 stumpings. He was a very popular player and was regarded as one of the best wicket-keepers in the world during his time.

Kiran More is often cited as one of the most exceptional Indian wicket-keepers of all time. He played a total of 49 Test matches and 94 ODIs for India. In his career, More amassed a total of 1848 runs and effected 160 dismissals (137 catches and 23 stumpings).

More played his first test against England at Lord’s in 1986 and his first ODI against Sri Lanka in Sharjah in 1984. He was a regular member of the Indian team throughout the late 1980s and early 1990s. More achieved his career-best Test score of 73 against New Zealand in 1989.

There are few players who have been as prolific and successful as Rahul Dravid. The Indian legend was not only a great batsman but also an excellent wicket-keeper. He is widely regarded as one of the most talented wicket-keepers of all time.

Dravid made his debut for India in 1996 and went on to play 164 Test matches and 344 ODIs for his country. He scored over 24,000 runs in international cricket and was involved in some of India’s most famous victories. He was also part of the Indian team that won the 2011 World Cup. Dravid is currently the head coach of Team India.

There is no denying that Farokh Engineer was one of the best Indian wicket-keepers of all time. He was known for his superb glovework and was also a very useful lower-order batsman. Engineer played 46 Test matches for India and scored over 2500 runs at an average of just under 32. He also held the record for the most dismissals by an Indian wicket-keeper in a Test match, with 11.

Engineer’s international career came to an end in 1975, but he continued to play first-class cricket until 1987. He represented several teams during his first-class career, including Bombay, Maharashtra and Orange Free State.

Without a doubt, Wriddhiman Saha is among the world’s top wicketkeepers right now. He has been a revelation for India in Test cricket and has been one of the main reasons behind India’s success in the longest format over the last few years. Saha made his Test debut against England in 2010 and immediately made an impact by scoring a century in his very first innings. He has since gone on to score over 4000 runs in Test cricket and has been a rock behind the stumps for India. In 2022, Saha retired from International cricket.

Rishabh Pant is one of the most promising young wicket-keepers in Indian cricket. He made his first-class debut for Delhi in 2016 and has been a regular member of the team since then. In 2018, he was included in India’s Test squad for their tour of England. He made his Test debut against England at Lord’s in 2018 and impressed everyone with his batting skills.

Pant has also played for the Indian Under-19 team and was a part of the team that won the 2016 Under-19 World Cup. He is an attacking batsman and is known for his big-hitting abilities.

Dinesh Karthik is one of the best Indian wicket-keepers of all time. He made his debut for India in 2004 and has since played over 100 matches for his country. Karthik is known for his exceptional glovework, and he is also a useful lower-order batsman. In 2019, he was named as the captain of the Indian national team for the first time.

Karthik has been a regular member of the Indian squad for many years, and he is widely respected within the cricketing community. He is a popular figure among fans, and his performances have earned him a great deal of praise.

KL Rahul is one of the top Indian wicket-keepers today. He made his debut for India in 2014 and has since played a key role in the team’s success. Rahul has taken some brilliant catches and affected many stumpings. He is also a very good batsman and has scored plenty of runs for India. Rahul is currently the vice-captain of the Indian team and is sure to lead the side in the future. In 2019, he made some controversial remarks due to which he was suspended by BCCI for a time. However, since then, Rahul has maintained focus on his cricket and has been in tremendous form.

We have listed the best Indian wicket-keepers of all time. These players have had a great impact on the game and we hope to see more amazing Indian wicket-keepers in the future. If you fancy betting on Cricket online, click here to follow Cricwall.com. It features great bookmaker reviews and live Cricket score.