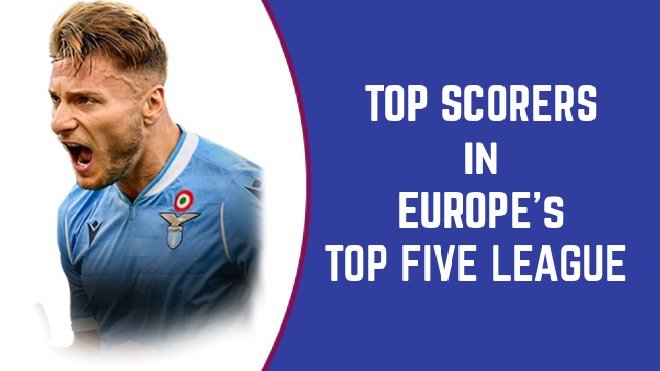 Finally, the domestic leagues have ended and we have the list of the top scorers from the top 5 leagues of Europe. A surprise awaits us:

At no.1, we have the 30-year-old Italian-born striker, who has won the race for scoring the most goals this season in the domestic leagues and also the winner of the European Golden Shoe, which is usually dominated by the usual suspects. Having scored 36 goals in 37 appearances and providing 8 assists, the Lazio forward has raised some eyebrows with his performance this season.

Out of the 36 goals scored, 14 of them were from the penalty spot, some might argue easy pickings but penalties are always tricky. With Lazio qualifying for the UEFA Champions League next season, he would be very glad about his contribution.

The Polish international has been the talisman for FC Bayern for quite some time now and has finished as the top scorer of Bundesliga with a career-best of 34 goals in 31 games this season, he also has 4 assists to his name. The 31-year-old striker has had an incredible goal ratio of 1:11 goals per game this season and was one of the most important factors in FC Bayern lifting their 8th league title in a row.

A lot of fans think he is a strong contender of the infamous Ballon d’Or this year, but sadly the cancellation of the award due to the COVID-19 pandemic, it won’t be possible to know, which has caused a stir, as this would have been a close one.

La Pulga as he is called by some and G.O.A.T by the rest had an incredible season as usual individually. He scored 25 goals and set a record number of providing 21 assists in one season. He has broken the previous La Liga record for most assists in a season (20), held by another Barca legend Xavi. Messi becomes only the second player ever to score and assist 20+ goals in a season.

He was awarded his 7th Pichichi Trophy this season for his goal-scoring efforts. Despite his incredible display of football, Barcelona has had a season to forget as they dropped points consistently to their rivals Real Madrid, who were crowned the Spanish champions.

Jamie Vardy has had a good season, finishing as the top scorer of the premier league and as the oldest winner of the English golden boot at the age of 33 years. He scored 23 goals this season in 35 appearances. The Sheffield born forward has even whipped up 5 assists to his name.

With his age taking a toll on his physicality, his playing days are possibly numbered. One can only hope he continues to perform at this level for a few more years to come. With Leicester City losing out on the Champions League spot, the question arises, can we ever see Vardy and the Foxes amongst the elite anytime soon?

This year’s Ligue 1 top scorer award has stirred a little controversy, as it was awarded to the 21-year-old Kylian Mbappé who hit the net 18 times in 20 appearances, with AS Monaco’s Ben Yedder also scoring the same amount in 26 appearances. The French Ligue 1 officials recognized Mbappé as this year’s top scorer, as the latter had scored 3 goals from the penalty spot and all of Mbappé’s goals came from open play. While PSG was crowned the champions, AS Monaco failed to even qualify for any form of European football spot as they finished 9th on the table.

Some may argue about the fact that the French Ligue 1 officials’ decision to end the season based on the standings, was a bad one, it turned out to be true, as the normal play of football resumed in most of the top 5 leagues, and few teams missing out the battle on securing a European spot.