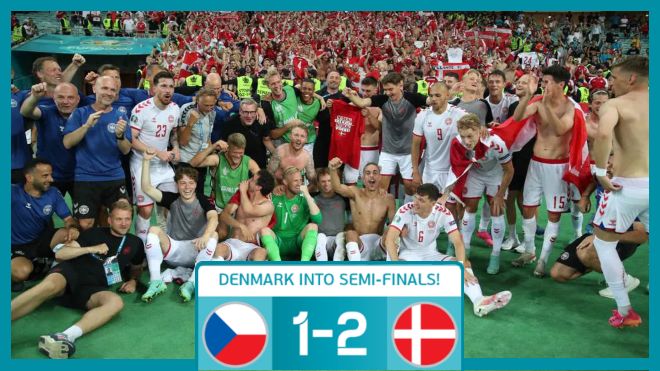 UEFA Euro 2020: Denmark overcome the Czech Republic challenge to go into the semifinals

Denmark defeated the Czech Republic by two goals to one in the quarterfinals of the UEFA Euro 2020 on Sunday night. Denmark will be playing the winner of England vs Ukraine in the semifinals of the competition.

Denmark took the early lead in the game as Delaney headed in home. Stryger Larsen delivers a pinpoint cross into the Czech Republic penalty box from a corner. He finds Delaney right in the middle completely unmarked who fires it in.

Delaney had yet another opportunity minutes later but couldn’t connect well. Once again Larsen went on the overlapping run and got away a low cross towards Delaney but the ball lands awkwardly and he can’t finish.

The Danes got their second of the match from Dolberg. This time the attack comes from the left-hand side as Maehle sprints ahead and delivers a cross towards Dolberg who connects sweetly. Denmark goes into the halftime break with a healthy two-goal cushion.

However, the Czech Republic are quick to respond in the second half. Czech Republic’s star man Patrick Schick gets into the act as he finishes Coufal’s cross with a fine volley and is able to beat goalkeeper Schmeichel.

Denmark brought on striker Poulsen for Dolberg who almost made an instant impact but Soucek is there to make the clearance. Moments later Tomas Soucek takes a whack in the head from Poulsen and has his head bandaged.

After suffering a horrible shock in their first game with losing Christian Eriksen, Denmark have bounced back remarkably. This will be their first semifinals appearance since 1992 wherein they won the tournament.