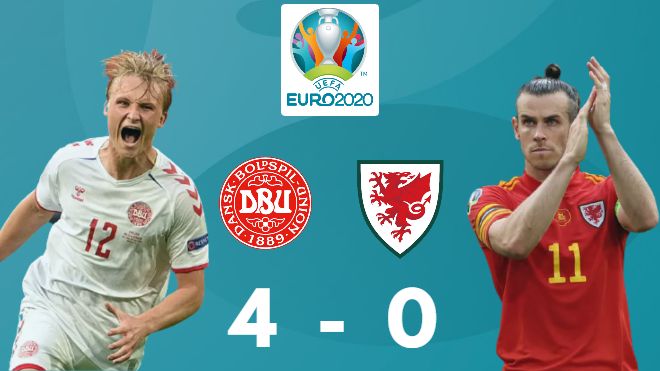 UEFA Euro 2020: Denmark put 4 past Wales to progress through to the quarterfinals

Denmark and Wales kicked off the knockout stages of the 2020 European Championship (Euro 2020) on Saturday night. The Danes put on a fantastic display to hammer the Welsh by four goals to nil. After the setback of Christian Eriksen in the first group stage game, Denmark have done remarkably well to recover.

It was Kasper Dolberg who scored the first goal for Denmark in stunning fashion. Damsgaard made a good run after Maehle’s pass to direct it towards Dolberg who curled in an inch-perfect effort past goalkeeper Ward.

Kasper Dolberg scored his and Denmark’s second of the game early on in the second half. Braithwaite surged down the right flank before delivering a low cross into the middle which was cleared horribly by Williams straight into Dolberg’s feet. He takes a touch before firing in the shot.

Denmark’s players surely had their shooting boots on as Maehle this time got into the act with a superb curling effort. He collects the ball over the top from Jensen before cutting inside and getting a shot away with his left foot.

Things soon turned worse for Wales as Callum Wilson received a red card for his challenge on Maehle. It’s a soft decision by the referee but nonetheless, the Liverpool youngster has to go as his country reels behind.

Braithwaite put the final nail in the coffin for Wales with the fourth goal which was initially ruled off for offside but then was overturned by VAR. He latches on to the knockdown by Cornelius and hammers the ball past Ward.