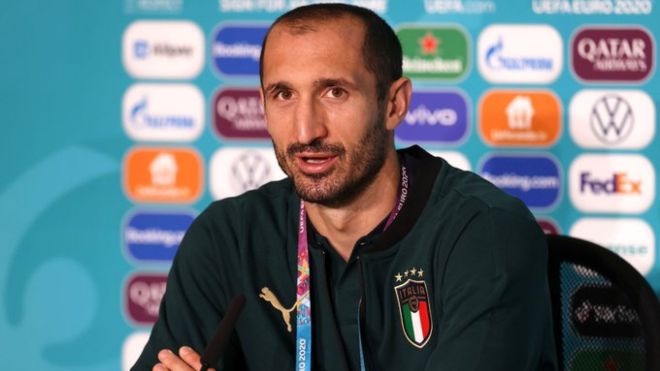 UEFA Euro 2020: Giorgio Chiellini is going to be Italy's main man in the final against England

Italy have once again come back to the international scene after roaring into the finals of the UEFA Euro 2020. The Italians defeated Spain in the semifinals to book a place at Wembley against England.

Roberto Mancini’s men have been nothing short of exemplary and a lot of the credit goes to his impeccable defence. But with the likes of Leonardo Bonucci and Giorgio Chiellini, you would expect that.

Giorgio Chiellini is going to be crucial against this England attack for many reasons. Firstly the experience that Chiellini brings into this game is immense. Having played at the top level for 15 years is no joke.

Like Alvaro Morata has rightly said that playing against Chiellini is “like being put in a cage with a gorilla and you have to steal his food”. He is a brick wall and will have to play his best game if Italy are to defeat and repel England’s attack.

Although Giorgio Chiellini has missed two matches in UEFA Euros already, the trust remains in him for his manager. Even after missing games he was back against Belgium in the quarterfinals and contained Romelu Lukaku.

“He doesn’t need to be evaluated. All that matters is that he gets back playing and is fine,” Roberto Mancini said.

“For us, Chiellini is fundamental, also as a point of reference in the dressing room for a young squad. And the moment he steps on the field, you already know that he will give everything,” he said.