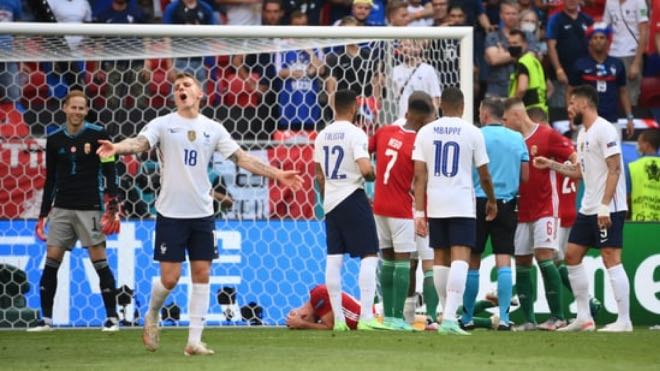 Attila Fiola’s impressive strike for Hungary and then Antoine Griezmann’s rescue goal for France made the game ended in a draw in this Group F encounter of the Euro 2020. The match was played in Ferenc Puskas Stadium in Budapest, Hungary on Saturday. France got a tough competition from the home side in this match and the scoreline ended on 1-1.

Talking about the game, France as usual, started to dominate by their attack. They hold the possession with 70% of the ball in the first half but had missed several chances to convert into a goal. Kylian Mbappe, Karim Benzema, and Antoine Griezmann got the chances but failed to give a France lead in this game. But before the closing of the first half, Hungary got a vital moment as Attila Fiola scored the first one for Hungary. This put Hungary in the driving seat of the match and got a psychological advantage before moving forward to the second half.

France were trailing behind and was desperate to score to equalize the game and make a comeback whereas Hungary looked more attacking and aggressive in the second half. The 66th minute changed the whole course of the game. The coordination between Mbappe and Griezmann rattled the Hungarian defense which helped Griezmann to score the goal. This helped France to equalize the game after trailing for more than one hour. France once again got another chance to strike, but Mbappe missed it once again. The match scoreline ended on 1-1 at Budapest.

Antoine Griezmann, who proved himself as a saviour for France after the match said, “We’ve become unaccustomed to a full house and so it was difficult with the crowd. They held us with their defensive block and we didn’t know how to finish. It proves how tough the Euros are, with great teams and great players.”

Hungary who looked very impressive in this encounter will play their next game against Germany at Allianz Arena on Wednesday while the defending champions Portugal and the runners-up of last edition France will face each on the same day.