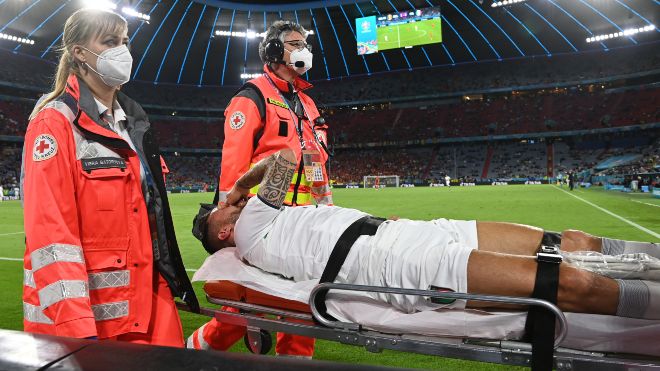 Italy defeated Belgium in the quarterfinals of the UEFA Euros 2020 on Saturday night to progress through to the semifinals. Goals from Nico Barella and Insigne ensured that Roberto Mancini’s men powered past the number one ranked team in the world. For Belgium, Romelu Lukaku scored from the penalty spot.

However, Italy will be missing one crucial player in the semifinals against Spain. Left-back Leonardo Spinazzola suffered a horrible injury in the game and had to be stretchered off. Moreover, Belgium’s Nacer Chadli also had to be substituted due to injury.

According to reports, Spinazzola has suffered an Achilles tendon injury and won’t be able to play anymore in the tournament. He had to be stretchered off in the 79th minute as Italy brought on Emerson Palmieri as his substitute.

“Unfortunately we all know how it went but our blue dream continues and with this great group nothing is impossible,” Spinazzola said on Instagram.

“He didn’t deserve that, he has been one of the best players of this tournament and he will still be even if he can’t play in the next games,” Mancini said.

“We are very, very sad with what has happened it seems quite a serious one,” he added.