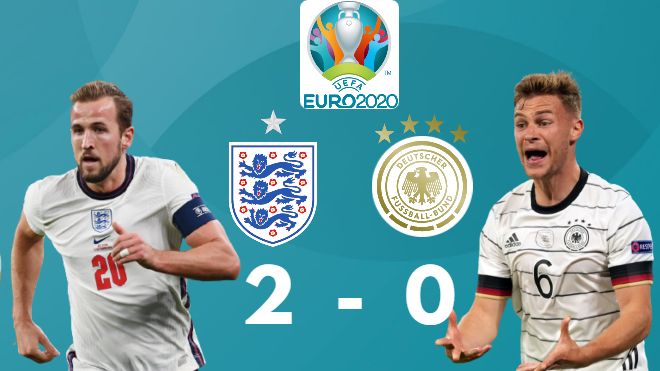 Gareth Southgate’s new England side have finally managed to achieve redemption for the 1996 European Championship semifinals defeat against the Germans. This young English side have created history and progressed through to the quarterfinals of the competition.

The first real opportunity of the match fell for Chelsea striker Timo Werner. His teammate at the club, Kai Havertz slid in a ball down the left flank for Werner who shot with his left foot. However, Jordan Pickford was quick to assert the situation and closed down the angle to produce a fine save.

German fans must’ve had their hearts in their mouths in the final minutes of the first half as the ball fell for Harry Kane. Kane is just about to let loose when Mats Hummels slides in from behind to make a crucial challenge.

Finally, Raheem Sterling broke the deadlock and put England in front much to the delight of the fans at Wembley. Jack Grealish finds the overlapping run of Luke Shaw on the left who fires in a low cross. Raheem Sterling gets ahead of Antonio Rudiger and slots the ball in.

Thomas Mueller was presented with the chance to put Germany ahead but he cracked under pressure. Kai Havertz with the through ball and Mueller ran into free space with only Pickford to beat. However, the German dragged his shot wide to break German hearts.

For all the criticism he faced up to the match, Harry Kane has managed to silence them. Luke Shaw got the interception in the middle of the field and passed to Jack Grealish. Grealish’s cross finds Harry Kane who nods past Manuel Neur.