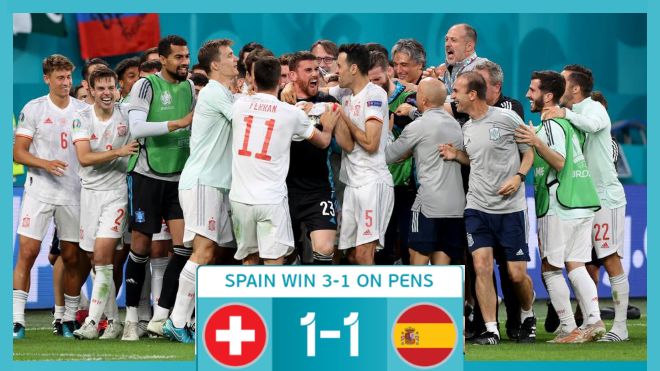 Luis Enrique’s Spain have managed to reach the final four of the UEFA Euro 2020 after defeating Switzerland on penalties. In a match full of high-intensity action, it was the Spanish who could keep their cool after the game ended 1-1 in regular time.

Spain took the early lead in the match after just 15 minutes. Midfielder Koke took a deep corner kick which was too high for Aymeric Laporte and fell for left-back Jordi Alba who took the shot. However, it took a large deflection off Zakaria and went in. Goalkeeper Jan Sommer had absolutely no chance.

Chelsea defender Cesar Azpilicueta had a great chance to double the lead after Koke found him in the penalty. Azpilicueta’s header however is straight at Jan Sommer. On the other hand, Okanji headed wide from a corner kick for Switzerland.

A horrible mix up between defenders Pau Torres and Aymeric Laporte gave Switzerland the equaliser. Freuder capitalised on the mistake and squared up for Xherdan Shaquiri who finished it off by slotting the ball in the corner.

However, just minutes later Freuder is given a straight red and Switzerland are down to ten men. Although Freuder won the ball in the challenge against Moreno, he went in with his boots up. Referee Michael Oliver had no hesitation to show the red card.

Moreno had the final opportunity in regular time after Jordi Alba delivered a low cross but he flashed just inches away. Throughout the extra time, Switzerland were focused on clearing the ball away. Jan Sommer was called into action on quite some occasions but he held on.

Sergio Busquets was the first one to take the penalty and he hit the post whereas Gavranovic steamed it home. Dani Olmo was next for Spain and under pressure, he took a fine penalty but Switzerland’s Schar’s effort was saved by Unai Simon.

From there onwards Switzerland missed all their penalties which included Vargas and Akanji. The final penalty taker for Spain for Oyarzabal who finished it off to power Spain into the semifinals.