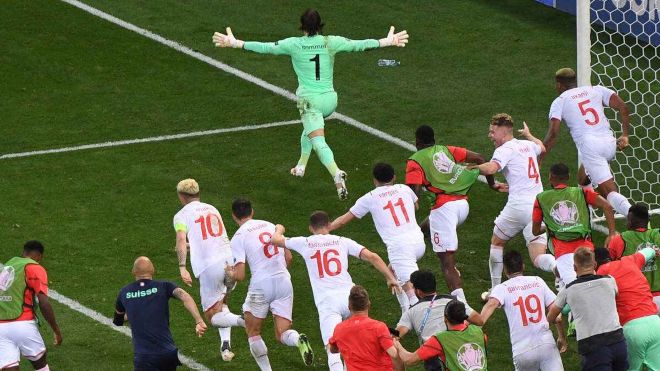 UEFA Euro 2020: Switzerland 'Shock' France to advance to the quarterfinals

The 2020 UEFA Euro continues to surprise us all! In remarkable fashion, Switzerland have caused a major disappointment in the tournament after they defeated World Champions France on penalties on Monday night to get through to the quarterfinals.

The Swiss took the early lead via Seferovic’s header past Hugo Lloris. The ball fell towards Zuber who delivered into the penalty area and Seferovic rose higher than Clement Lenglet to head the ball in. Switzerland had a golden opportunity to get them two to the goods early in the second half.

Zuber once again troubles Pavard on the left-hand flank and is taken down. However, he is honest and gets up back on his feet before being dispossessed. The referee takes a look at the replays and decides to award a penalty to Switzerland. However, Rodriguez’s shot is weak and saved by Lloris.

Karim Benzema put on a show for France in a quick time to completely turn around the match. The first one after a lovely dink over the onrushing goalkeeper. And the second after Kylian Mbappe and Antoine Griezemann combined beautifully to put it on a plate for the striker.

Paul Pogba struck the ball as sweetly as you can from a good 40 yards. A curling effort full of power which left Sommer absolutely no chance. At this stage, France is 3-1 up and nobody gave Switzerland any chance.

But not once did they retreat. Continuously pushed the French defence back and tested their resilience. Mbabu whips in a cross and it’s once again Seferovic who gets at the end of it. Two on the night for the striker.

In the dying minutes, Gavranovic steams through the middle of the park at the end of Granit Xhaka’s though ball and fires past Hugo Lloris! Switzerland have crawled back into this game. In a major sucker punch move, Kingsley Coman could’ve once again put France ahead had his shot not deflected off the bar.

At the end of extra time, the score remained 3-3 and into penalties we went. All four penalty takers for either side scored but the difference at the end was Kylian Mbappe. Yan Sommer pulled off a fine save to complete the impossible for Switzerland.