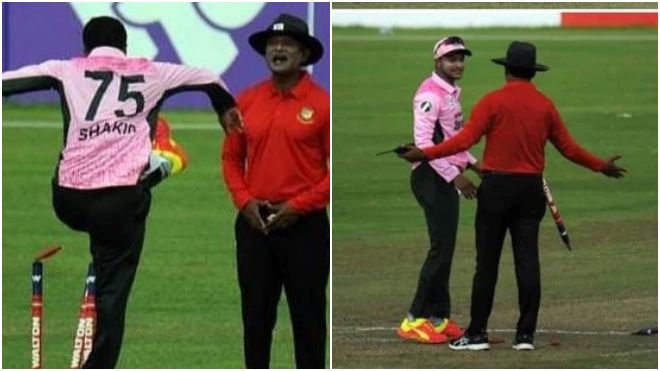 Umpires will be punished if their roles turn out to be questioned: Bangladesh Cricket Board

Just a few days back Shakib Al Hasan had heated altercations with the umpire. He then landed in a big controversy for this behaviour. He uprooted the stumps out of frustration during one of the matches during the Dhaka Premier League. However, it later came out to be a matter of biased umpiring.

Bangladesh Cricket Board (BCB) recently stated that they would punish the umpires if their decisions turn out to be questionable. A five-member committee made to check out the matter. Cricket Committee of Dhaka Metropolis and BCB met with nine captains of DPL and heard their views on the umpiring system.

Only 3 captains were unable able to attend the meet as they were busy in their matches.

Sheikh Sohail, the BCB director, and a member of the investigation committee stated, “Nine captains were present at the meeting. 3 captains were late to return from BKSP so they couldn’t join”.

Sohail also mentioned, “There has been a lot of talk on the umpiring issue. The captains said about how to resolve the umpiring issues. We also seek suggestions from them on how to prevent controversy, have heard all their statements, and will sit with the other three captains tomorrow.”

He further added, “We have made a lot of progress in cricket in the last seven-eight years. We always want the best. They will get the punishment accordingly if they found their decisions questionable.”

Talking about Shakib’s controversy, he has issued a public apology for his behaviour. However, BCB created a drama in front of journalists while announcing his suspension of 3 matches.