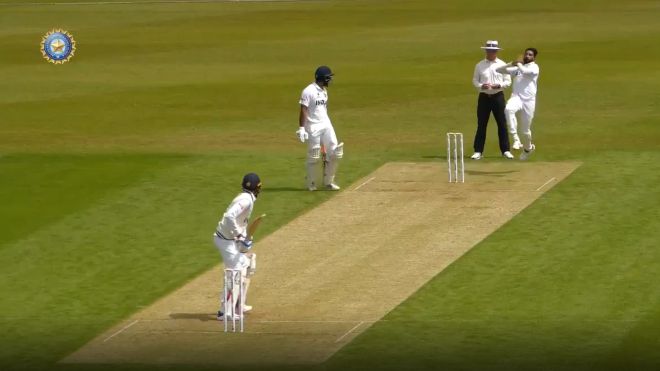 WATCH: India plays an Intra-Squad match ahead of the World Test Championship Final

Team India has ramped up their preparations ahead of the ICC World Test Championship Final. The Board of Cricket Control in India (BCCI) shared the highlights of an Intra-Squad match that is being played before the final.

BCCI took to social media to show glimpses from the practice match amongst the Indian team. The video shows the likes of Ravichandran Ashwin, Jasprit Bumrah, Mohammed Shami go up against the batsman Virat Kohli and Rohit Sharma. Before this, BCCI have also shared a 1-minute clip of the training montage.

Team India arrived in England on the 3rd of June. Moreover, they had to spend a mandatory 3-day quarantine before being allowed to play. They are currently staying at the Hotel Hilton. Many of the players have shared pictures from their respective hotel rooms.

However one must also keep in mind that New Zealand are better prepared than India at the moment. The Kiwis are playing a two-match series against England to ramp up their preparations.

But team India is also not far behind currently as they test out their match readiness. The World Test Championship Final is starting on June 18th at the Ageas Bowl in Southampton.

After the World Test Championship Final concludes India will be playing a 5 match series against hosts England. The last series between the two sides went to India. The men in Blue defeated the British 3-1.