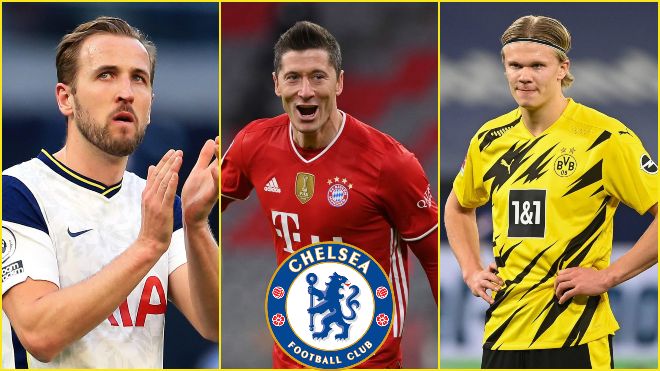 What are the striker options Chelsea have this transfer window? Take a look

The summer transfer window is open and clubs are in full flow to make reinforcements for their squads. The European champions so far haven’t made any new signing but have been linked with a variety of players.

So far Chelsea have had outgoing players more in Fikayo Tomori, Billy Gilmour and Lewis Bate and are yet to have anyone incoming. However, the Blues are making progress in some areas and can be expected to make one big signing.

The foremost priority for Chelsea remains a striker and they have been linked with lots of them. We take a look at all the options for Thomas Tuchel in this article ranging from Erling Haaland, Lewandowski to Harry Kane.

“We need more goals and we rely on anybody and we want to trust anybody who is capable of scoring,” Tuchel said in April.

“Our top scorers have six goals. This is clearly not enough for the demands, the expectations and the targets Chelsea football club has and what we demand,” he added.

The number one name is that of Norwegian international Erling Braut Haaland. The Borussia Dortmund striker has been linked with Chelsea for a long time now and there’s definitely slow progress.

Chelsea owner Roman Abramovich is apparently ready to deliver Erling Haaland to Thomas Tuchel regardless of the price tag. Abramovich has according to reports already gathered £130 million in cash for Haaland.

Next up is none other than Robert Lewandowski of Bayern Munich. The highly experienced Polish striker is linked with Chelsea with Lewandowski wanting a new challenge of playing in the Premier League.

Robert Lewandowski’s contract ends next season at the Allianz Arena. Chelsea have made contact with Lewandowski’s agents but are yet to establish formal talks with Bayern Munich.

The last option Chelsea are targeting is of Premier League proven material Harry Kane. Tottenham Hotspur’s main man has opted to leave the club this season with Manchester City the most interested in him.

City have already bid £100 million for Harry Kane but saw it rejected. Although it’s unlikely Harry Kane will make the switch to Chelsea, the blues have been in initial level talks. Kane is a prolific striker and Chelsea want exactly that kind of player.