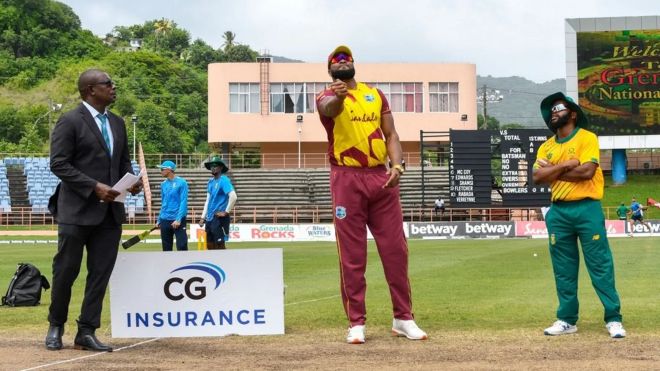 It was a formidable resilience shown by the Proteas in the 2nd T20I as they beat West Indies by 16 runs and leveled up the series by 1-1.  Skipper Temba Bawuma’s 46 runs in the 1st innings and George Linde, Tabraiz Shamsi, and Kagiso Rabada’s phenomenal bowling helped South Africa to script their comeback in the series.

Talking in detail about this second encounter, West Indies won the toss and elected to bowl first in Grenada, and invited South Africa to bat first. Opener Reeza Hendricks and Quinton De Kock gave a flying start to the Proteas and scored 69 runs in their first 6 overs. Hendricks scored 42 runs in 30 balls with 5 fours and 1 six and De Kock made quick 26 runs in 20 balls. Both of them had a partnership of 73 runs. De Kock was the first wicket to fell in Proteas’ innings.

After the first wicket, South Africa was not able to hold their innings properly, despite the efforts from Captain Temba Bawuma who scored 46 runs in 33 balls. The problematic middle-order collapse once again shackled the South African innings to a big total on the board. Batsmen like David Miller and Rassie Van Der Dussen went out cheaply and did not able to fire up.

South Africa somehow scored a respectable total of 166 runs with the loss of 7 wickets in their limited 20 overs. Obed McCoy was the highest wicket-taker for West Indies. He claimed the 3 wickets of David Miller, Heinrich Klassen, and George Linde. Andre Russell and Jason Holder got 1-1 wicket each and Kevin Sinclair got 2 wickets.

West Indies got the target of 167 runs. West Indies started their innings a controlled way but lost the first wicket in the form of Evin Lewis on 31 runs. He scored 21 runs and Anrich Nortje got the wicket of Lewis. After the first wicket, the West Indies innings got collapsed in the chase. They lost  5 wickets in 70 runs. Fabian Allen somehow fought back and scored 34 runs in 12 balls. He hit 5 monstrous sixes and helped the innings to return in the match, but in the end, fell short by 16 runs. West Indies scored 150 runs with the loss of 9 wickets in their 20 overs.

Tabraiz Shamsi and George Linde were very economical. Both of them got  1 and 2 wickets respectively. Kagiso Rabada got 3 wickets. Anrich Nortje got 1 wicket.

George Linde was the ‘Man of the Match’ for his economical bowling. He got 2 wickets in 19 runs in his 4 overs quota.  The third T20 will be played on Tuesday, 29th June.