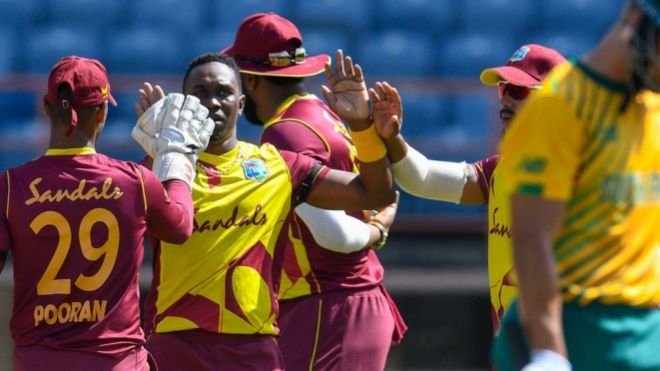 Captain Kieron Pollard’s 51 runs in 25 balls and Dwayne Bravo’s 4 for 19 runs helped the West Indies to beat South Africa by 16 runs in the 4th T20I and levelled the series by 2-2. It was strong resilient action shown by the West Indies which helped them to keep alive themselves in the 5-match series.

Talking about this clash in detail, South African skipper Temba Bavuma won the toss and elected to bowl first in Grenada. West Indies made two changes in their side, Jason Holder and Kevin Sinclair went out and in their places, Chris Gayle and Fidel Edward came in. South Africa went unchanged. Windies came out to bat and had a subtle start. The first wicket that fell out was in the form of Evin Lewis, who scored 7 runs and was dismissed by Anrich Nortje.

On one end, Lendl Simmons was scoring his efforts, but on the other end, Chris Gayle and Shimron Hetmyer went out cheaply. They scored 5 and 7 runs respectively and were dismissed by Kagiso Rabada and George Linde. The middle-order shackled once again. Simmons valiant effort came to an end. He scored 47 runs in 34 balls with 4 fours and sixes each. West Indies were struggling at 89 runs for 5 wickets with that dismissal.

But, captain Kieron Pollard played a blazing captain knock of 51 runs in 25 balls with 2 fours and 5 sixes. He changed the momentum of the game and along with Fabian Allen, helped the West Indies to reach out to the fighting total of 167 runs with the loss of 6 wickets in 20 overs. For South Africa, George Linde and Tabraiz Shamsi got 2-2 wickets each and Anrich Nortje and Kagiso Rabada got 1-1 wicket.

South Africa needs to chase 168 runs. When they came out to bat, they did not have a great start as Opener Reeza Hendricks got out by Chris Gayle in the second over. Quinton De Kock on the other hand started to counter-attack and was in the way to make the innings more style. But, the middle order chaos for the Proteas once again disrupted their innings. Captain Bavuma, Aiden Markram , Van Der Dussen and David Millar did not able to fire up. De Kock’s fighting inning also came to an end. He scored 60 runs in 43 balls with 6 fours and 2 sixes before being dismissed by Bravo.

South Africa’s run chase mission failed as they scored 146 runs with the loss of 9 wickets in their 20 overs. West Indies won this game by 21 runs. For Windies, Dwayne Bravo was sensational with his bowling. He got 4 wickets in 19 runs in his 4 overs of quota. He got the wicket of De Kock, Linde, Shamsi, and Lungi Ngidi. Andre Russell got 2 wickets, and Gayle, McCoy, and Pollard got 1 wicket each.

Kieron Pollard for his captain knock of 51 runs was awarded as Man of the Match. The last and the Decider 5th T20I will be played on Saturday, 3rd July.