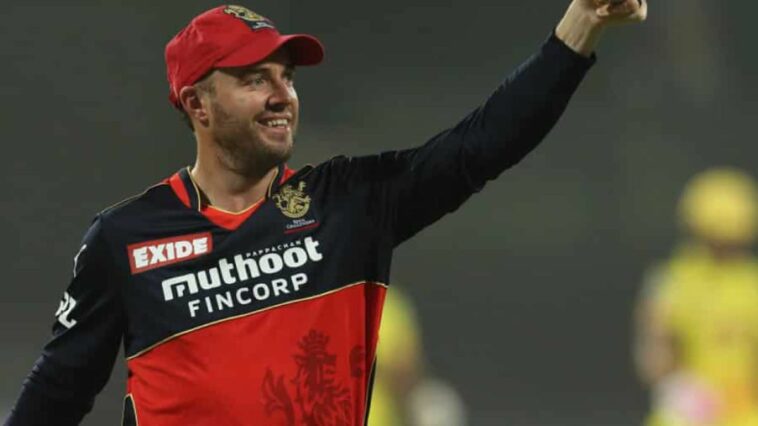 “Would Love To Return...”: AB de Villiers confirms his presence for IPL 2023 to RCB

Legendary South African batter AB de Villiers has confirmed his intention of returning to the IPL next year and will join the Royal Challengers Bangalore. However, he has not provided any details about his role but confirmed that he won’t return to RCB as a player.

He can join the team as a consultant or a mentor in the next season of the Indian Premier League (IPL 2023). After last year’s IPL (IPL 2021), the former South Africa captain announced his retirement from all formats of cricket.

Recently, the franchise has included him in RCB’s Hall of Fame and honoured him for his services in the Indian Premier League. He has been the most vital player for the RCB since 2011 and has won several games single-handedly.

Former RCB captain, Virat Kohli had hinted about de Villiers joining the RCB team next year. He told that he misses AB a lot and speaks to him quite regularly.

De Villiers is one of IPL’s most successful overseas players. He started his IPL career with the Delhi Daredevils (now Delhi Capitals) in 2008 where he scored 671 runs in three seasons but then moved to Royal Challengers Bangalore in 2011 and played 11 seasons for the franchise till last year.

During his amazing career with RCB, de Villiers appeared in 157 IPL matches and scored 4522 runs with an average of 41.20.

In his recent interview with VUSport, he told that he heard about IPL matches returning to Bangalore, and he would love to return to his second hometown. De Villiers’ announcement comes days after Virat Kohli, his former RCB colleague announced that he would come back to the IPL next year.

“I am delighted Virat has verified that. To be realistic, we have not yet made up our minds but would love to return to witness the Chinnaswamy stadium (RCB’s home ground in Bangalore) in full capacity. I will undoubtedly attend the IPL next year. I’m not certain what position I’ll will be serving in, but I’m looking forward to returning,” de Villiers told VUSport.

Earlier, RCB batter Virat Kohli had also talked about how de Villiers can very well be with RCB in the next season in some capacity.

“I miss him a lot. I speak to him regularly, quite regularly. He keeps messaging me. He was in the US recently watching golf. Augusta Masters is what I heard it was called. So he told me he was there experiencing it with his friends and family,” Kohli had said in a video posted on RCB’s official Twitter handle.

“So we stay in touch and he’s very keenly watching RCB and hopefully here next year in some capacity,” he added.