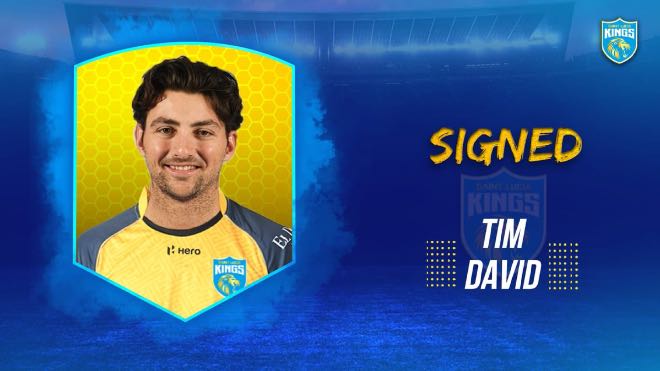 Singaporean cricketer Tim David has been signed by Saint Lucia Kings for the 2021 Caribbean Premier League (CPL 2021). The 25-year-old has been roped in as a replacement for Australian wicketkeeper-batsman Matthew Wade, who had to pull out of the competition due to International commitments.

Wade will be part of Australia’s limited-overs squad when they take on West Indies and then Bangladesh in the coming few months, and would therefore be unavailable for CPL 2021.

Who is Tim David?

Tim David is a 25-year-old all-rounder from Singapore who is known for his aggressive brand of cricket. He is the son of Rod David- who was also an International cricketer for Singapore in the 1990s. Tim has played 14 T20 Internationals for Singapore, since making his debut in 2019 against Qatar.

It is however in the franchise cricket world that Tim David has really carved out a niche for himself. The all-rounder was picked by Perth Scorchers in the 2017-18 Big Bash League season. This season, he signed with the Hobart Hurricanes and in his very first game for the franchise got a match-winning fifty in quick time. David was the third-highest run-getter for the Hurricanes in BBL 2021, amassing 279 runs at a healthy average of 31.

David also played in the remainder of the 2021 Pakistan Super League, where he was roped in as a replacement for Joe Burns by Lahore Qalandars. David was the leading run-getter for his franchise in PSL 2021, scoring 180 runs at a strike rate of close to 200. Tim David was instrumental in some of the wins accrued by his side in this edition of the Pakistan Super League.