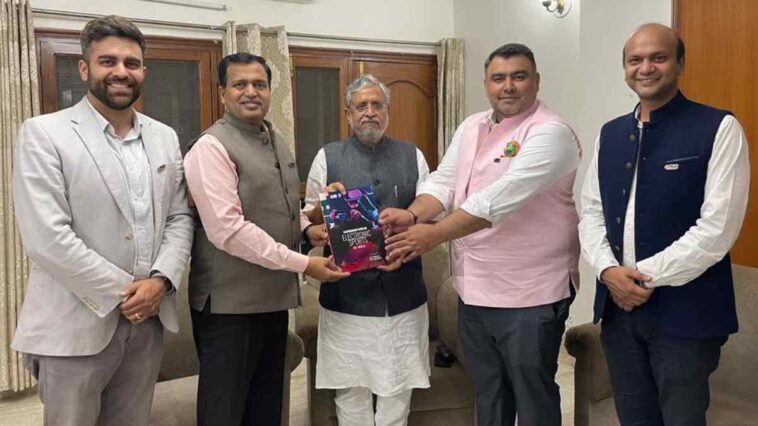 To drive consensus around building an Esports ecosystem that benefits India first, the Federation of Electronic Sports Associations of India (FEAI), the apex national body for Esports in India met with Sushil Modi, Former Dy CM of Bihar and Member of Parliament (Rajya Sabha) on March 16.

FEAI delegation shared its Esports Policy Paper with Sushil Modi. The policy paper will soon be released for public consumption as well. The paper incorporates views of all Esports stakeholders to build an inclusive Esports ecosystem that ensures the primacy of Esports athletes. FEAI has also submitted the policy paper to Rajeev Chandrasekhar, Hon’ble Minister of State Electronics & Information Technology earlier during the day.

Vaibhav Dange, Founding Member, Federation of Electronic Sports Associations India said, “FEAI is focused on bringing a holistic perspective for the development of esports in the country. The policy must cater to all stakeholders: be it the developers who are designing the game or the players playing the game, or organisers organising tournaments. We are thankful to Shri Sushil Modi ji for meeting us and sharing his views on online gaming & how India should ensure positive regulation. We will further focus on these aspects and work towards a consensus for all-round rapid development of esports in the country.”

Gagan Narang, Founding Member, FEAI said, “FEAI’s vision is to create an incredible Ecosystem for esports in India that will be favourable for the generations to come and to boost sustainable growth of esports based on shared value of fairness, transparency and integrity and sharing that growth with players, associations and innovators to make India a leading nation in the esport universe. I am delighted that our policy paper seeks to facilitate a policy-centred esports outlook that aims to address India’s unique definition for esports, which not only welcomes conventional global esports outlook but most importantly promotes India’s indigenous talent and narrative. The discussions with Shri Sushil Modi have given us additional perspective for our future endeavours.”

During the meeting and interaction with FEAI founding team members, Sushil Modi raised very important concerns regarding online gaming & how India should ensure positive regulation. He appreciated and supported FEAI in its efforts in segregating esports from online gaming.

FEAI has drafted the policy paper after interacting with the stakeholders. FEAI is focused on bringing Indian games to the fore. FEAI is also looking at a bottom-up approach, wherein it can host tournaments at colleges, universities, districts etc. to cultivate the esports culture.

India is amongst the top 5 mobile gaming markets in the world. In the next 2 years, this sector will be worth Rs 3 lac crore. As the Honourable Prime Minister Narendra Modi has time and again highlighted, India should lead the digital gaming sector, develop games inspired from its culture, folk tales and this is the genesis of the idea of FEAI of taking India’s ideas, definitions, and athletes in a rightful manner to the global centre stage.

There are over 1.7 million esports users presently in India, and some of these are professional athletes who have won international laurels for the country. Esports is set to be a medal sport in the Asian Games 2022, it will also be played as an exhibition event during the Commonwealth Games 2022 and FEAI hopes could be soon inducted in the Olympics once the International Olympic Committee determines the format.