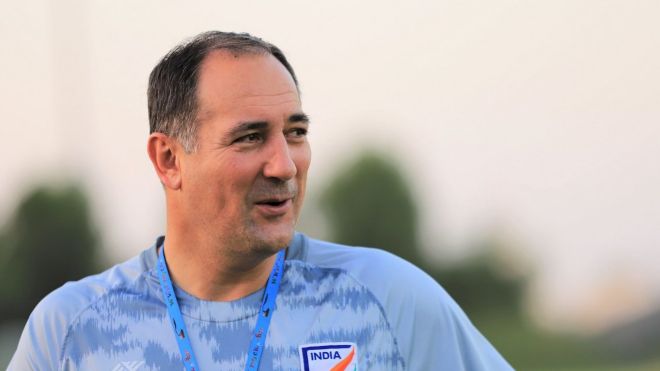 I am at par with Mourinho and Guardiola: Igor Stimac makes a bold statement

Current Indian National Team coach Igor Stimac believes that India have performed well in the FIFA World Cup Qualifiers. India finished third in their group behind leaders Qatar and Oman. Although they didn’t proceed further in the world cup qualification, they will be in contention to play in the third round of the AFC Asian Cup Qualifiers.

The Men in Blue ended their 2022 World Cup qualification campaign with four draws, three losses and one win from their eight matches. Moreover, they scored six goals and conceded only seven.

In their final group stage game, they drew 1-1 with Afghanistan to finish third. Many Indian fans were excited with the arrival of Igor Stimac and believed the Croatian would bring in an instantaneous impact. However, that has not happened and the team is lacking in many aspects.

But on the other hand, Igor Stimac believes he has done a lot in a short span of time. “Somehow we managed to finish in the second round of the (World Cup) qualifiers in third position which was our target. Now we need to prove ourselves in the third round with more quality in the passing football, especially in the final third. How to herd the opponent in the final third comes from the way you play in the domestic league,” he said.

The fans always want more. We agreed upon changing the course by playing higher-ranked teams in friendly games, giving opportunities for our players to face real difficulties because ISL is not bringing pressure. Don’t get me wrong but there is no relegation. It’s far different from playing top-level international football in the qualifiers against sides like Qatar, Oman, UAE, Syria and others who are much higher ranked. What is the actual form of these teams is also important,”  Stimac added.

But one statement that did stand out was Stimac comparing himself to the likes of Jose Mourinho and Pep Guardiola. According to him, even great and accomplished managers like Mourinho and Guardiola couldn’t do a better job than he has done with the Indian Football Team.

“I could be fired but not even (Pep) Guardiola or (Jose) Mourinho could do more in these circumstances,” Stimac said.