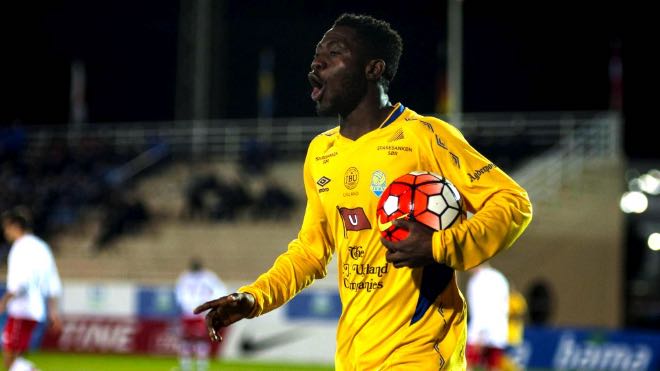 Gokulam Kerala FC have signed Dennis Antwi Agyare, a Ghanaian forward, for the upcoming I-League season (I-League 2020-21). The 27-year-old has experience in playing for top clubs in Malaysia, Sweden, and Norway.

Born in Accra, the capital of Ghana, the forward started to play at the age of 12 for Ajax Academy in his city. He later went on to play for Accra Hearts of Oak SC, a Ghanaian Premier League club.

Later he was loaned to another Malaysian club, Perlis FA. In 2013, he returned to Ghana, where he played for International Allies FC. After a highly successful season in his home town, where he scored 10 goals in 12 appearances, he moved to Swedish Division Two club FC Rosengård 1917.

Antwi had yet another superb season at the Swedish club, where he started in 20 matches and scored 10 goals. His next stint was at FK Jerv, a Norwegian first division club. He scored 10 goals for them before moving to Norwegian top division team IK Start, where he started 29 matches and scored 14 goals. He later moved to Norwegian club Asane and also returned back to Sweden to play for Trelleborgs FF, a second division club.

“I am delighted to join Gokulam Kerala FC. The club has a vision and is highly ambitious. Their vision is attractive. I also spoke with their new coach and understood what he wants,” Antwi said.

“My wish is to bring happiness to GKFC fans by winning the league. I am eagerly waiting to start training with my teammates in India,” he added.

“Antwi is a player who has got a champion mentality. He has got experience in playing in higher-level leagues in Sweden and Norway. He can play as a winger, center-forward, and also as a second striker. His main quality is his sprint pace and he is also very powerful. I believe he will find success at the club,” said Gokulam Kerala FC head coach Vincenzo Alberto Annese.

“Antwi would be an asset for us in the upcoming I League. We wanted a highly experienced player, and Antwi easily fits the bill. With such quality players, we are aiming at building a champion squad for the upcoming season,” said Gokulam Gopalan, the chairman of Gokulam Kerala FC.