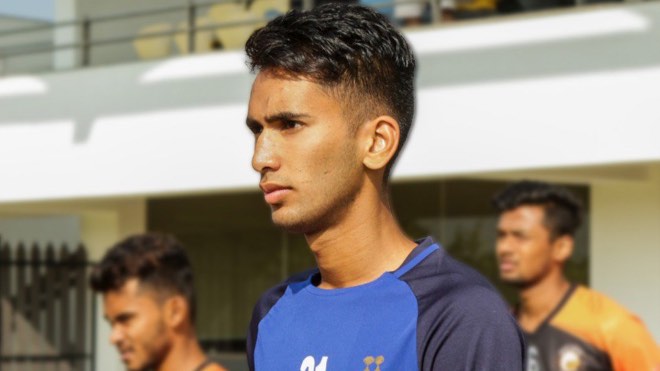 Twenty-year-old Ajin Tom has signed for Gokulam Kerala FC for the upcoming I-League season (I-League 2020-21). The full-back, who is from Wayanad in Kerala, was part of the All India Football Federation’s development squad Indian Arrows last season.

The young and talented Kerala player had made 11 appearances for Indian Arrows during the I-League 2019-20 and had a stint with Chennaiyin FC ‘B’ team during 2018-19 season. He was also part of the 24-member probable list for the under-17 world cup team.

The player was handpicked to the AIFF Elite Academy after his performance for Kerala team in the under-14 national football champions held in Kalyani in Kolkata. He was eventually promoted to the under-16 national team, where he went on to play Under-16 SAFF Cup in Bangladesh and finished runners-up.

Ajin also captained India under-16 team in the BRICS Cup held in Russia and was also part of the 4-Nations Cup held in Mexico. Ajin, who graduated from AIFF Elite Academy, started 13 matches for Chennaiyin ‘B’ team in the I-League second division. After the season, he was picked by the AIFF to its developmental squad, where his debut match was against Gokulam Kerala FC, last season.

“I am excited to join Gokulam Kerala FC. During my childhood, I had played a lot of tournaments at EMS Corporation Stadium. So the stadium is like a second home for me. I look forward to have a great season ahead and I believe I could learn more under the Italian coach Vincenzo Alberto Annese,” said Ajin Tom.

“We are looking for more talents from Kerala and we are happy to sign a talented player like Ajin Tom who is from Wayanad. We are committed to give chances to players from Kerala and we wish Ajin the very best for the upcoming season,” said Gokulam Kerala FC chairman Gokulam Gopalan