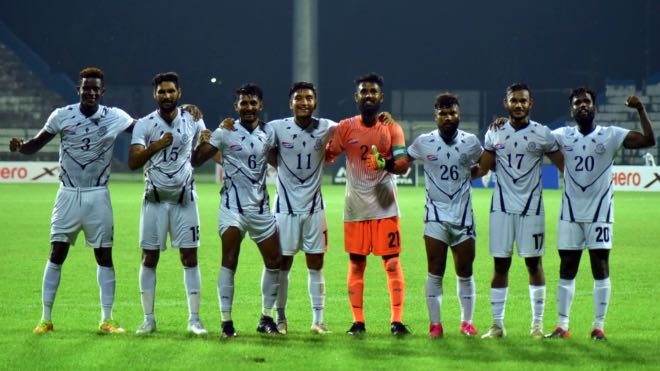 Mohammedan Sporting secured their place in the 2020-21 edition of the I-League as they bested local rivals Bhawanipore FC in I-League Qualifiers 2020 match on Friday (October 16, 2020) at the Kalyani Stadium.

With this win, Mohammedan Sporting will be returning to the I-League after a gap of seven years, who last played in the I-League in the 2013-14 season.

Goals from Vanlalbiaa Chhangte and Gani Nigam gave the Black Panthers a 2-0 win, which enables them to tie down first place in the competition despite one round of fixtures still to play.

With 9 points, Mohammedan Sporting with one match to play, three ahead of Bhawanipore — who also have one game remaining on the final day.

On the last matchday on Monday (October 19, 2020), Mohammedan Sporting will face FC Bengaluru United at the VYBK Stadium while Bhawanipore will take on ARA FC in Kalyani.

After the match, Mohammedan’s assistant coach Saheed Ramon stated, “It’s a great feeling for all of us to qualify for the Hero I-League. It means a lot to us. Qualifying this time is a very good thing for the club and our supporters.”

Talking about the game, he said, “We had studied Bhawanipore’s game and knew that they are strong on the counter-attack. We put out our strategy according to that and it worked well.”

Bhawanipore FC head coach Sankarlal Chakraborty said, “The defeat is disappointing, of course. We knew that Mohammedan are a strong team and they played well. We had our fair share of chances and if we could convert them, the result would have been different. Now, our focus on the next match against ARA FC on October 19.”