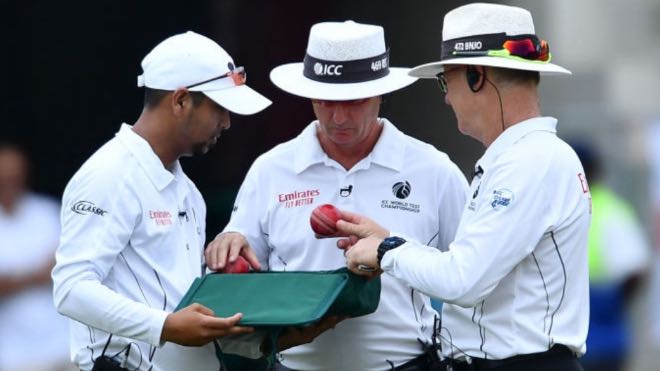 In May ICC Cricket Committee have recommended banning the use of saliva to shine the ball and appointment of non-neutral umpires and referees which is now approved by ICC.

Regulation changes approved by ICC are:

Teams will be allowed to replace players showing OCVID-19 symptoms during a Test match. The replacement will be approved by match referee same as in case of concussion replacements.

COVID-19 replacement will not be applicable during an ODI or T20 matches.

Ban on use of saliva to shine ball

ICC imposed a ban on the use of saliva to shine the ball. A team can be issued up to two warnings per innings but repeated use of saliva on the ball will result in a 5-run penalty to the batting side. Whenever saliva is applied to the ball, the umpires will be instructed to clean the ball before play recommences.

Initially, some leniency will be given but subsequent instances will result in the team receiving a warning.

As international travels are banned in several countries and also guidelines of the mandatory quarantine period, the local match officials can be appointed in the brief term.

The number of DRS reviews have been increased to three in Tests and two in limited over cricket per innings for each team. This is implemented to avoid decision as inexperienced local umpires will be appointed.

Code of Conduct hearing through video

The ICC Cricket Operations team will support Match Referees when processing Code of Conduct breaches, and a neutral Elite Panel match referee will conduct any hearing remotely via video link.

ICC have also allowed to but an additional logo, not exceeding 32 square inches in size on the chest of the Test match shirt and sweater in addition to the three other logos allowed as per regulations. As of now, logos on chests are only allowed in ODIs and T20Is.