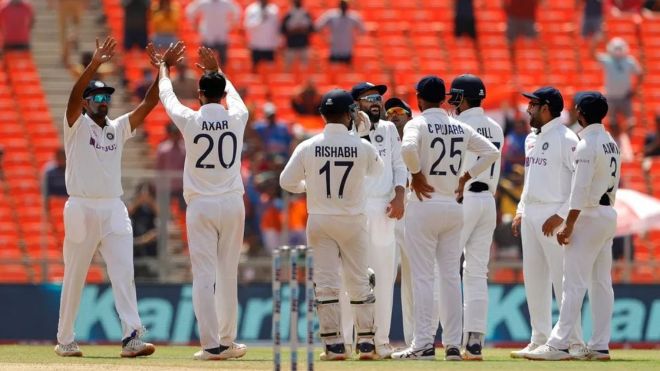 With the Start of the World Test Championship cycle in 2019, India has phenomenally performed throughout the tournament cycle. Started their campaign clinically against the West Indies on the Caribbean Soil to dominating the Proteas and Bangladesh on the home turf, dominating the points table but faced a big hurdle and struggle when they faced Blackcaps on their home turf, facing a clean sweep of 2-0.

Then India went down under and just created a mesmerizing history by winning the Border-Gavaskar Trophy 2020-21 by 2-1, despite against all odds from 36 All out in Adelaide in the first test. Captain Virat Kohli not being available, players getting injured by every test which in the end made this test series victory impeccable in the history of Indian Cricket.

England arrived in India and showed a classical performance in the first test, but the Indians know how to show resilience and won 3 back to back matches, won the series by 3-1, and also qualified for the finals for the World Test Championship where they will be playing against New Zealand in Southampton from June 18.

Lets go through the India’s phenomenal performance every Test by Test as it brings out the heroes from the team.

India started their cycle Caribbean where they faced West Indies in the first test in Antigua. Windies won the toss and invited India to bat first on a bouncy track where India scored 297 runs all out with the contribution of Ajinkya Rahane’s 81 runs. Ishant Sharma’s 5 wicket haul slaughtered West Indies first Innings. Then Rahane’s good ton In 2nd innings, and Jasprit Bumrah’s 5 wicket haul dismantled the West Indies innings in 2nd innings which led India to win by 318 runs.

In the second test in Jamaica, India outplayed the Windies in every vertical. India scored 416 runs in the first innings with the help of Hanuma Vihari’s maiden test ton and Mayank Agarwal, Virat Kohli, and Ishant Sharma’s half-centuries. With the ball, Jasprit Bumrah was the hero, taking his first test hat-trick and got his 6 wickets, steamrolled the West Indies Innings on 117 runs. In the end, India won by 210 runs and grabbed the series by 2-0 and got all 120 points with 60-60 points each test.

This series was the first home test series for India in WTC where they were playing against the Proteas. It was a 3 match test series with the first test to be played in Visakhapatnam.

India won the toss and elected to bat first, placing the new opening combo of Rohit Sharma and Mayank Agarwal. They just grabbed the opportunity and neutralized the South African bowling attack. Rohit Sharma scored his first ton as an opener scoring 176 runs and Mayank Agarwal shined with his Maiden double ton of 215 runs. Both had a great opening partnership of 317 runs which led India to score and declare on 502 runs with the loss of 7 wickets. South Africa in return somehow scored 431 runs, all due to the tons from Dean Elgar and Quinton De Kock. Ashwin started with the ball by taking 7 wickets, but in the second innings, it was once again The Rohit Sharma show where he scored another ton in the same match scoring 127 runs. And at last, Mohammad Shami destroying the South African innings with his 5 wicket haul and helped India win by 203 runs.

The Second Test in Pune witnessed the greatness and masterclass of Virat Kohli, scoring his 7th double ton and highest 254 runs not out which led to the mammoth total declaring on 601 runs with the loss of 5 wickets. South Africa didn’t have any answers for India’s Dominance as they bundled out on both innings and got an innings defeat of 137 runs.

Ranchi was the venue for the 3rd Test. India won the toss and elected to bat first but didn’t have a great start as they lost 3 early wickets in the form of Mayank Agarwal, Cheteshwar Pujara, and Virat Kohli. Rohit Sharma and Ajinkya Rahane came to the rescue and played the gem of knocks. Rahane scored a ton of 115 runs and A big maiden double ton for Rohit Sharma who scored his best 212 runs. South Africa once again bullied by the Indian pace battery and blew an innings defeat of 202 Runs. India clean swept the series by 3-0.

The series had 2 test matches. The First Test match in Indore where Mayank Agarwal’s second double ton of 243 runs and Mohammad Shami’s impeccable performance with the ball helped India to win by an innings and 130 Runs.

The Second Test was the historic one in the history of Indian cricket as India was playing its 1st Pink Ball in Kolkata. Bangladesh won the toss and elected to bat first. Indian Pace attack once again Steamrolled the Bangladeshi Innings on 106 runs. Ishant Sharma became the first Indian bowler to get 5 wicket haul in a pink ball test match. India in return in the first Innings scored 347 runs with the loss of 9 wickets declared where Virat Kohli scored his 70th International Century and became the first Indian batsman to score a ton in the pink ball test. He scored 136 runs. Bangladesh didn’t have any resistance or answer for the Indian Pace Battery. Umesh Yadav and Ishant Sharma destroyed the Bangladeshi Innings on 195 runs and led India to win by an innings and 46 runs. This was the 4th consecutive win for India with the margin of an innings.

After winning the consecutive three series on home soil, India went to face one of the toughest opponents New Zealand. India struggled a lot against New Zealand in the whole series. It was a two match test series where India was outplayed by the Blackcaps. New Zealand beat India in the first test match in Wellington by 10 wickets and won the second test match by 7 wickets in Christchurch. This was the first and the only series loss in the WTC cycle for India.

India’s next mission then was the ultimate and the biggest challenge in this cycle. It is the challenge from down under where India was in the quest to defend the trophy as they won it last time in 2018/19. It was a four match series.

The First Test was played in Adelaide. India won the toss and elected to bat first. India scored 244 runs all out. Virat Kohli scored the highest 74 runs. Australia in return scored 191 runs all out, but the second innings became the nightmare for India as India collapsed and got all out on its lowest ever score of 36 runs. Australia got the target of 93 runs and they easily chased it and won by 8 wickets. This was a very humiliating defeat for India.

After this Test, Virat Kohli went home due to personal reasons. But India showed their character and resilience in the second Test match in Melbourne where Ajinkya Rahane played a captain knock and scored a ton of 112 runs. Along with Ravindra Jadeja’s 57 runs and contribution from the fast bowlers helped India to equalize the series by 1-1 and made a comeback after a terrible loss in Adelaide.

The third Test in Sydney will always be remembered for India’s character of steel and resistance. Australia was ahead in the game, all credits to the elegance and brilliance of Steve Smith who scored a ton in the first Innings as well as a half-century in the second innings. India needs to chase the target of 407 runs, but the resistance shown by Cheteshwar Pujara, Rishabh Pant, Hanuma Vihari, and Ravichandran Ashwin successfully survived and helped India to make the test match drawn, but the injury issues were becoming more severe and before going to Brisbane, several players were down and out.

In the 4th Test in Brisbane, Jasprit Bumrah, Ravindra Jadeja, Hanuma Vihari, Ravichandran Ashwin were not playing. The only fast bowler who was experienced was Mohammed Siraj and that of only 2 Test Match. Washington Sundar and T Natarajan made their debut. India was playing at the Gabba where it is called the Australian fortress.

Australia won the toss and elected to bat first. Australia scored 369 runs with the help of Marnus Labuschagne’s century of 108 runs. India in the first innings was struggling but a fighting knock from Washington Sundar and Shardul Thakur moved India to score 336 runs all out. Mohammed Siraj’s inspiring 5 wicket haul stopped Australia on 294 runs and set the target of 328 runs.

And then miracle happened, India chased this target with the loss of 7 wickets. All courtesy to the Innings of Shubman Gill, Cheteshwar Pujara, and Rishabh Pant’s heroic knock of 89 runs not out and breached the “Gabbatoir”. India won the match by 3 wickets and series by 2-1 and made this series historic in the history of world cricket.

After the heroic series win down under, India once again came back to their home soil and ready for the English challenge. It was a 4 match test series. The First Test was in Chennai and it was All-Joe Root Show as he scored a double century on his 100th test match and India was down and out and was beaten by 227 runs. But then India made a comeback in the series by winning the next 3 test matches and qualified for the World Test Championship Final.

India is now ready to face The Blackcaps from 18th June at the Hampshire Bowl in Southampton where the world will get its maiden World Test Championship Final.