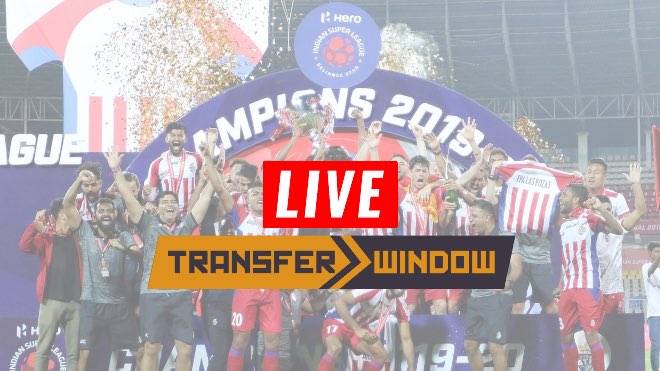 Follow all the latest updates from the Indian football transfer market, who your team is signing and where is your favourite player heading to, follow all the live updates below:

On Sunday, Chennaiyin FC announced that goalkeeper Karanjit Singh has extended his stay at the club till the end of the 2020-21 season. The 34-year-old is set for a sixth consecutive campaign for the Marina Arena side, having won the Indian Super League twice with the club in 2015 and 2017-18, starring especially in the second triumph.

Hyderabad FC announced the signing of 23-year-old defender Konsham Chinglensana Singh ahead of the upcoming season of the Indian Super League (ISL 2020).

FC Goa announced the signing of Spanish midfielder Alberto Noguera on Thursday ahead of the upcoming season of Indian Super League (ISL 2020). The Spaniard has put pen to paper on a two-year deal that will see him remain a Gaur till the summer of 2022.

Hyderabad FC announced the signing of the Australian attacker Joel Chianese ahead of the upcoming season of the Indian Super League (ISL 2020). The 30-year-old forward signed a one-year contract with the Hyderabad-based side on Thursday.

Odisha FC roped in Brazilian footballer Marcelo Leite Pereira a.k.a Marcelinho ahead of the seventh edition of the Hero Indian Super League (ISL 2020). The 33-year-old forward signed a one-year contract with the Bhubaneswar-based side on Wednesday.

On Sunday, Chennaiyin FC announced the appointment of Csaba László as Head Coach for the Indian Super League (ISL) 2020-21 season. With over two decades of coaching experience at club and international level, this will be the 56-year-old Romania-born Hungarian’s first stint in Asia. László joins CFC at a momentous time with the club, completing six years on August 28.

Hyderabad FC signs former La Liga player and defensive midfielder João Victor de Albuquerque Bruno for one year. The 31-year-old Brazilian, who is commonly known as ‘João Victor’, joins from Greek Super League side OFI Crete FC and has signed a one year contract, which will expire in May 31st 2021.

ATK Mohun Bagan officially announced on Tuesday that they have signed young Indian forward Manvir Singh on a 3 year deal, he previously played for FC Goa.

Northeast United FC have roped in Gerard Nus as their official head coach from 2020-21 season onwards, Nus is a UEFA Pro License holder and is just 35 year old.

The former FC Goa player Ferran Corominas has been approached by Kerala Blasters FC according to IFTWC, the striker has parted ways with Goa after the club didn’t offer a reasonable offer.

Chennaiyin FC today announced that Germanpreet Singh has extended his stay with the club, the midfielder has signed a multi-year deal with the Chennai based team.

Mohammedan Sporting Club officially announced the signing of SK Faiaz, he can play in the midfield and previously played for ATK and Mohun Bagan

Jamshedpur FC in talk with former Chicago Fire and Houston player Alex Lima writes KhelNow, the Brazilian is currently free agent and available for free. He plays as a midfielder.

Bengaluru FC have announced their latest acquisition in former Chennai City FC player Ajith Kumar who is most likley to be the replacement of Nishu Kumar, who left the club to join Kerala Blasters FC.

Mohammedan Sporting have announced the official signing of Nepalese star player Abhishek Rijal, who is also popularly known as ‘Nepalese Ronaldo’ to the fans.

Mohammedan Sporting officially announced the signing of Suraj Rawat who plays as a attacking midfielder.

Jamshedpur FC is set to sign former Motherwell FC captain Peter Hartley. Peter is a 32 year old centre-back and can also play in left-back. As per Sources, he has signed a 2 year deal with the ISL side.

ATK Mohun Bagan FC announced earlier today that they have retained the services of Carl McHugh for another year till 2021. Carl stated that he is looking forward to help the team defend the ISL trophy as well as chase after the AFC Cup