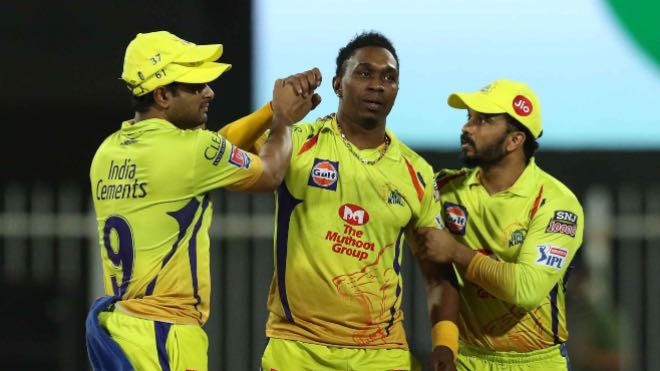 Chennai Super Kings all-rounder Dwayne Bravo has been ruled out of the rest of the Indian Premier League (IPL 2020) due to a groin injury. The 37-year-old death overs specialist suffered a groin injury during the match against Delhi Capitals on Saturday (October 17) and sat out of the last game against Rajasthan Royals on Monday (Oct 19).

“It’s sad for me to be leaving my team (at this point). I want you all to keep encouraging the team, keep supporting,” Bravo told fans in a video posted on the CSK Instagram handle.

“This wasn’t a season that we expected and our fans wanted, but we gave it our best and sometimes our best, the results don’t show. I can guarantee you, we will come back stronger,” he added.

Dwayne Bravo has also been ruled out of the upcoming West Indies tour of New Zealand. He will be replaced by Romario Shepherd, the 25-year-old all-rounder, who made his international debut last year against Afghanistan and received his cap from Bravo himself. Bravo, the two-time T20 World Cup winner, will now return to Trinidad to continue his rehabilitation.

On missing New Zealand tour, Bravo said, “I was really looking forward to the tour of New Zealand as it has been so many months since I last wore maroon in Sri Lanka back in March and we are all so excited about building towards defending our T20 World Cup next year. Unfortunately, the injury I sustained on Saturday playing for CSK has not only ruled me out of the IPL but also the tour. I’m making arrangements to return to Trinidad over the next few days where I will continue my rehab and treatment. I’m fully committed to representing the West Indies and I just need to get myself stronger again.”

West Indies will visit New Zealand from November 27 to December 15. They will start the tour with three T20Is, followed by two Test matches as part of the ICC World Test Championship.