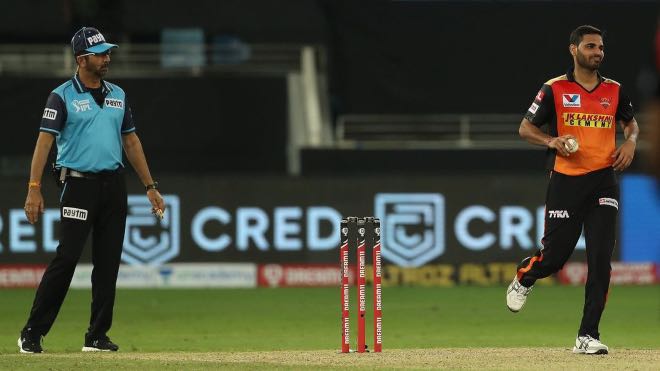 In the IPL match played against Chennai Super Kings on Friday, the team’s most experienced bowler Bhuvneshwar Kumar was injured during the 19th over.

Bhuvneshwar had trouble going to the runup before bowling the second ball of the 19th over, after which the team physio Ivan Spechli came to the ground and gave him some treatment but it did not improve the condition of Bhubaneswar and he went off the field.

Whether or not Bhuvi will return in the match against Mumbai Indians today, it has not been decided yet.

In the last match against CSK, Khaleel Ahmed completed the over by bowling five balls of the remaining over in place of Bhuvi who went off the field after bowling the first ball of the 19th over.

At the same time, Abdul Samad played an important role in the last over of the innings to help the team win by seven runs. The 30-year-old Bhubaneswar has been injured several times during his career.

He suffered from a sports hernia before the T20 series against the West Indies last year. Earlier, he was trained at the National Cricket Academy to recover from his injury suffered during IPL 2018.

Bhubaneswar was not fully fit for the Australia tour at the end of 2018. He suffered a hamstring injury during the match played against Pakistan in the World Cup 2019.

Apart from this, Bhuvneshwar Kumar could not go on a tour of the West Indies after the World Cup. Bhuvneshwar Kumar had to sit out due to side strain. Bhuvi returned to the team earlier this year for the series against South Africa, but the series was cancelled due to Coronavirus outbreak worldwide.