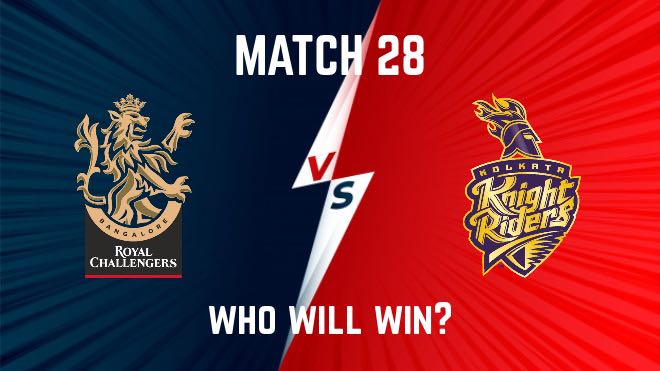 Four of the five games played at Sharjah International Cricket Stadium, Sharjah in IPL 2020 have been won by the team batting first. So most batting first will be the first option for both the teams.

The average score here is 200+ in last 5 matches of IPL 2020 and average first inning score is 210+. Rajasthan Royals chased down 223 against King’s XI Punjab. But wicket is slowing turning in favour of bowlers, small boundaries tough a concern.

Looking the batting line-up of both the teams, high scoring match 200+ can be seen.

Coming to KKR, they will be targeting a hat-trick of wins, having won against Kings XI Punjab (KXIP) and Chennai Super Kings (CSK) in their last two games.

Kolkata Knight Riders and Royal Challengers Bangalore, both eye a move up the points table as they are third and fourth on the IPL 2020 points table.

Virat Kohli will be the key play for RCB against KKR, as he had scored 283 runs against KKR in last 4 matches. Also, Kohli looks in great form, he scored 90* off 52 balls against CSK in the last match.

Chris Morris will be also the key player for RCB in this as he picked 3 wickets during his side’s win over CSK in his first match for RCB. Also, Chris Morris has IPL success against two of KKR’s finishers – Karthik & Russell. He has dismissed both of them thrice.

In our prediction, Royal Challengers Bangalore are likely to win this match.