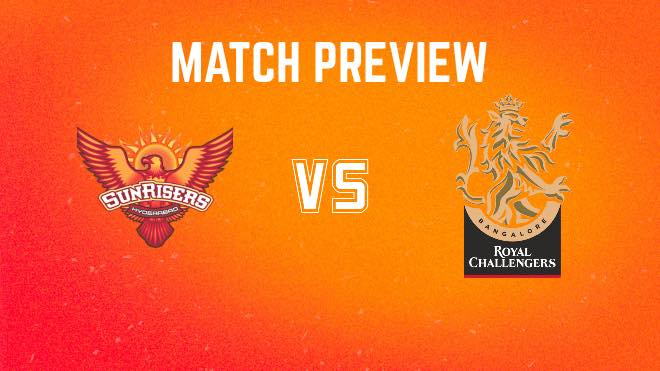 In the South of India, two teams with extremely enthusiastic fan bases will start their IPL 2020 campaign against one another. The Sunrisers Hyderabad (SRH) and the Royal Challengers Bangalore (RCB) are going to lock horns in Dubai to begin their Indian Premier League 2020 campaign off to a good start.

SRH was third in 2019 in the IPL league table but was defeated in the Eliminator in the hands of Delhi Capitals. The team will face a tough challenge to qualify for the playoffs again as each team have come to UAE with a very strong squad. RCB, in history of 12 IPL edition has never won the IPL tournament, but three times in the past they have reached the final, only to come out as losers.

Both teams consist of top quality players from around the world. While Sunrisers Hyderabad has players like Manish Pandey, David Warner, Kane Williamson and Rashid Khan, RCB too are not behind. Virat Kohli, AB de Villiers, Dale Steyn and Aaron Finch will represent the red army from Bangalore.

The Dubai International Cricket Stadium, Dubai, will host the match between Sunrisers Hyderabad and Royal Challengers Bangalore on 21 September 2020. The highest score that has been chased here is 183 runs. The expected 1st batting average score here is 145. Highest team total here in International T20 cricket is 211 runs, jointly scored by Sri Lanka and Ireland.

In the entire history of Indian Premier League, both the franchises have faced each other 15 times. And it is the team from Hyderabad that leads the battle with 8 wins while Bangalore managed to win 6, and 1 match has ended in no result.

In the last 3 years, both teams have faced each other 5 times. Among which, Sunrisers Hyderabad has managed to win 3 matches, and Royal Challengers Bangalore has won 2 matches.

Players To Watch Out For

Manish Pandey: Sunrisers Hyderabad will be relying very much on their Indian middle-order batsman Manish Pandey. With a batting average of 61.80, Manish Pandey has scored 309 runs in last 7 matches.

Rashid Khan: With the pitch conditions of Dubai, it is very much likely that spinners will be assisted a lot. Which could be very good news for Rashid Khan, he has picked up 13 wickets in last 10 matches.

AB de Villiers: Though Royal Challengers Bangalore lineup is filled with stars all around the squad, one man to keep an eye on is AB de Villiers. He has managed to score 349 runs in the previous 9 matches.

Navdeep Saini: Bangalore’s bowling department will be lead by Indian national team pacer Navdeep Saini. Saini’s speed and yorkers could turn out to be dangerous for SRH. Navdeep Saini’s has picked up 11 wickets from 10 previous matches. So expectation will be very high from the pacer.