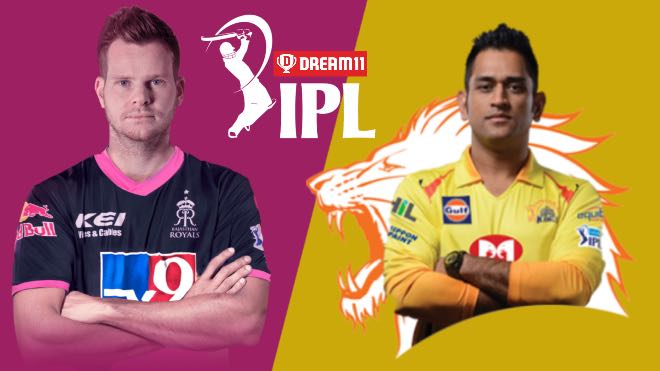 After returning to the IPL in 2018, Chennai Super Kings have won three out of four matches against Rajasthan Royals. The average score in Sharjah is 160; however, the winning score is 175. In the previous matches we have seen dew playing an unfair role in favor of the chasing side. Since 2018 forty-six matches have been played in Sharjah, out of which twenty-six have been won by the side chasing a target. For a change, in the past it has been a happy hunting ground for fast bowlers as they have picked up 64% of the total wickets.

Rajasthan Royals are missing couple of their key players in the opening tie. Joss Butler who arrived in the UAE with his family is on an extended quarantine and Ben Stokes is still in New Zealand with his family. Butler’s absence will allow Yashasvi Jaiswal to make his IPL debut on Tuesday. Robin Uthappa will be opening the innings along with Yashasvi Jaiswal. David Miller will once again be seen in a finisher’s role but this time not for Kings XI Punjab. Tom Curran also might get an opportunity to showcase his all-round abilities.

Chennai Super Kings who were already missing Harbhajan Singh and Suresh Raina, have added a new name to the list in form of Dwayne Bravo. Bravo is suffering from a knee injury but will be available later in the tournament. Murali Vijay looked completely off track against Mumbai Indians in the opening match and he might be replaced by Ruturaj Gaikwad who is back to the squad after testing negative for COVID-19. MS Dhoni also has an opportunity to play an additional bowler to strengthen his bowling unit.

The average first innings batting score in Sharjah is 158. The new ball will swing, and an odd bowl might just get stuck during the middle overs of the innings. The wicket would remain the same for both the innings, however the dew factor is again expected to favor the chasing side. 160 seems to be a par score on this wicket. Once again side winning the toss would like to chase under the lights.

This tie offers me a wide range of batsmen, in a T20 game we would like to stick to top order batsmen only as a result we have selected 5 frontline batsmen. Steve Smith, Ambati Rayudu and Faf du Plessis were our obvious choices. We had to choose between Robin Uthapa and Shane Watson. Since this is a fresh new Sharjah wicket and we are little uncertain if the bowl will come on to the bat properly, we are going with Robin Uthapa as he has a slightly better temperament than Shane Watson. Apart from these four choices we are keen to gamble with Yashasvi Jaiswal. Jaiswal is a promising youngster with wide range of shots higher up the order.

Since we have picked up 5 frontline batsmen, we can only have two all-rounders in my side. We are going with Ravindra Jadeja who has the ability pick wickets in the middle overs plus can score quick 20 odd runs as well. Sam Curran is our second all-rounder. The English Southpaw had an impressive first game against Mumbai and that is the main reason why he has retained his place in our team. Given an opportunity we would love to add Rahul Tewatia to the playing XI

Jofra Archer is an obvious choice for us. Archer has been in great form lately and has been a talismanic figure for Rajasthan. Deepak Chahar will make it in our team for his wicket taking abilities earlier on in the innings and the third bowler is Shreyas Gopal, who is expected to utilize moisture on the wicket to his benefit