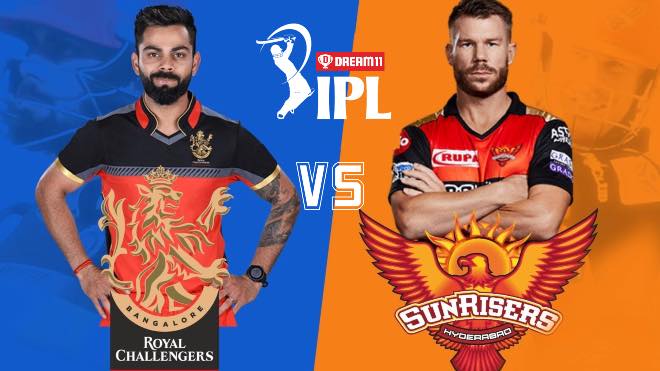 The two sides have shared a healthy rivalry in the past. David Warner comes back as the captain of the Sunrisers Hyderabad. Royal Challengers Bangalore enter the edition to sort out their over-dependence on Virat Kohli, AB de Villiers and leaking runs during death overs. Both sides have new coaching staff for the 2020 edition. Former New Zealand coach Mike Hesson is RCB’s Director of cricket and his team Includes Simon Katich, Adam Griffith, Sridharan Sriram and Shankar Basu. Whereas former England coach Trevor Bayliss is the Head Coach and his team includes Brad Haddin, VVS Laxman and Muttiah Muralitharan.

David Warner and Jonny Bairstow have good memories of the rampant double-century stand against RCB last year. SRH fancy their chances on Monday considering the concerns RCB has in their bowling department. Hyderabad have a balanced squad, however the middle order lacks experience. Either Warner, Bairstow or Pandey must play through the innings to guide SRH batting line up. Nabi and V. Shankar promise explosive batting lower down the order. SRH have always had one of the best bowling attacks in the competition and they have not disappointed in this edition either.

On paper Aron Finches’ inclusion has eased some pressure off from Virat Kohli and AB de Villiers. Generation Z lad Devdutt Padikal, has been in a great touch during Domestic competitions and carries a lot of expectations from the RCB supporters. Ironically SRH has not been a happy hunting opposition for Virat Kohli. Since the 2018 IPL edition Kohli averages only 17.5 with a strike rate of 121. In the pre-tournament interactions Kohli stated he was confident about the team composition and balance.

As we saw yesterday the wicket was slightly on a slower side. The power play overs will be crucial for both the sides. Spinners will play a major role during the middle overs of the match. Unfortunately, dew will again come into play. Even on Monday the side winning the toss would prefer chasing. 160 will be a competitive total.

We are not sure if Parthiv Patel would make it to the playing eleven especially if AB de Villiers is willing to play the role behind the wickets. We have gone for a safe but an in-form option, that is Jonny Bairstow. Bairstow has had an excellent run in the 2019 edition of the competition and is in a great touch. Bairstow has scored a century in the last competitive game he played.

Since the wicket is on a slower side, we are going with only three batsmen. Despite of a poor track record against SRH in the past we are sticking with Virat Kohli. Kohli is one of the best batsmen in the shorter format of the game. David Warner is an obvious choice walking into this game. His track record against RCB and in the UAE has been excellent. Since timing, the ball is not easy, we have excluded AB de Villiers and Aron Finch. We are gambling with the Indian opener Devdutt Padikal who seems to be an efficient batsman opening the innings for RCB.

This tie offers us a wide range of All-rounders, we are sticking with three all-rounders who have specific roles to play for their respective sides. Chriss Morris is a great option to attack during the middle overs especially with a spinner attacking from the other end. Morris often can pick up wickets in the middle overs and bowls in the death overs of the innings, the South African is also handy with the bat lower down the innings. Mohammad Nabi had an excellent Caribbean Premier League and is expected to carry his form into the Indian Premier League. Nabi can be explosive with the bat at the end of the innings. The third all-rounder’s position had a tough fight between Washington Sundar, Vijay Shankar and Shivam Dube. We have gone with Shivam Dube for his ability to pick up wickets and score runs in a quick succession.

Whenever SRH plays there are excellent bowling options to go with. We already have two fast bowlers and a spinner in the team. Since the wicket is on a slower side we have gone with two wrist spinners Rashid Khan and Yuzvendra Chahal and two medium pace bowlers Bhuvneshwar Kumar and Sandeep Sharma who have many variations in their armory and will prove vital on this wicket.