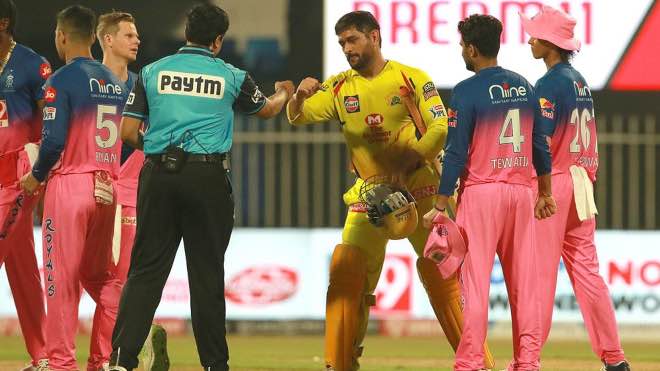 Rajasthan Royals came out victorious in a high scoring match against title favourite Chennai Super Kings. Rajasthan defeated CSK by 16 runs in a match where CSK was expected to win.

Rajasthan Royals played host to three-times champion Chennai Super Kings in the 4th match of the season. It was a high scoring match in which RR won by 16 runs. RR posted 216 runs on the board thanks to brilliant knocks from the trio of Sanju Samson, Steve Smith and Jofra Archer. In response, CSK failed to climb the big ladder.

Chennai Super Kings captain MS Dhoni won the toss and decided that they will bowl with the dew factor in mind, as nothing was known about the ground.

Rajasthan Royals decided to send out debutant Yashasvi Jaiswal to open along with captain Steve Smith. Jaiswal (6 runs of 6 balls) didn’t have a best of the debut as he was caught and bowled by Deepak Chahar after hitting him for a boundary the previous ball.

But then came in Sanju Samson. He was in another level today. He started carefully but then when his foot set in, he started to smack balls out of the stadium. Samson played a knock of 74 runs in 32 balls which include only 1 four and 9 maximums. He was dismissed by Lungi Ngidi.

And once it was looking like after a stunning start, Rajasthan Royals won’t be able to reach 200 due to slow scoring rate. But the action was not over yet. Jofra Archer and Tom Curran both scored 30 runs combined in the final over. And thanks to that over, Rajasthan Royals able to reach 216 runs in their 20 over. Archer contributed with match-winning 27 runs which included 4 sixes.

After a victory over Mumbai Indians in the opening match, CSK’s bowlers seemed off today. All of them gave away 30 plus runs while Lungi Nigidi and Piyush Chawla both gave 56 and 55 runs respectively.

On their way to the big chase, Chennai got to a good with both Shane Watson and Murali Vijay scoring runs. But after Watson was dismissed for individual 33 runs. CSK kept on losing wickets at regular intervals. Murali Vijay (21 runs of 21 balls) too followed Watson back to the pavilion.

With the big target in mind, MS Dhoni promoted Sam Curran up the order. And after hitting some crackers, Sam (17 runs of 6 balls) too departed. After that, it seemed like no one was interested to bat and stay in the crease along with Du Plessis.

But Faf Du Plessis kept the fight alive. But even he couldn’t do anything for CSK. Faf scored 72 runs of 37 balls before was dismissed by Jofra Archer in the 19th over. MS Dhoni struggled to hit the ball clearly in the initial phase. But in the final over’s final 3 balls, he blasted all those balls out for maximums, but by then CSK already lost the match. CSK only managed to score 200 runs for the loss 6 wickets after their 20 overs. Questions will be raised on CSK’s approach after this loss.

For Rajasthan Royals, Rahul Tewatia became the hero with the ball. While CSK spinners were struggling, Rahul proved difficult for the yellow army’s batsmen. Rahul Tewatia picked up 3 wickets and gave away 37 runs. Besides him, 1 wicket each for Jofra Archer, Shreyas Gopal and Tom Curran.

Sanju Samson named Man Of The Match after scoring firing 74 runs of 32 balls, which set the tone for Rajasthan’s win over Chennai Super Kings. His magnificent inning included 1 four and 9 big sixes.