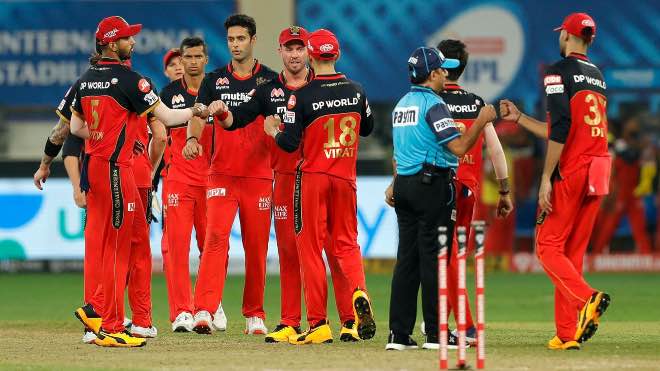 And it the Virat Kohli led Royal Challengers Bangalore (RCB) who end up winning the match by 10 runs after RCB bowlers managed to pick up all 10 SRH wickets.

Sunrisers Hyderabad captain David Warner won the toss and asked Virat Kohli and his company to bat first. The decision was taken keeping in mind the previous games and dew factor.

Young and debutant Devdutt Padikkal and Aaron Finch opened the inning for Royal Challengers Bangalore. Both of them gave a stunning start to RCB. Devdutt Padikkal scored 50 on his debut before was dismissed by Vijay Shankar for 56 runs.

The very next ball of the new over, Aaron Finch (29 runs off 27 balls) was shown the way to pavilion by left-arm orthodox bowler Abhishek Sharma. Virat Kohli, the captain of the RCB failed to show class as he was caught out in the hands of Rashid Khan by Natarajan.

RCB were on 123 runs when captain Virat Kohli got dismissed. From there on, only 5 overs were left. And then we saw Mr 360 into the action. AB de Villiers played a knock of 51 runs of 30 balls which consists of 4 fours and 2 sixes. From that stage, ABD gave RCB’s inning the pace it needed. RCB after 20 overs scored 163 runs. Setting up a target of 164 for the Hyderabad team.

For Sunrisers Hyderabad, only 3 bowlers picked up wickets, and those players are Natarajan, Vijay Shankar and Abhishek Sharma. Bhuvneshwar Kumar and Rashid Khan both left without any wicket.

Hyderabad’s chase begun with them losing the crucial wicket of captain David Warner for just 18 runs. From then on, Manish Pandey and Johnny Bairstow started to build the inning. Both shared a partnership of 71 runs before Manish Pandey was dismissed by Chahal for 34 runs.

Later on in the game, Johnny Bairstow departed after scoring 61 runs when Yuzvendra Chahal bowled the English wicket-keeper batsman. Just when Bairstow went back to pavilion, all kinds of trouble was seen during other Hyderabad batsman at the crease.

After Johnny Bairstow departed, almost no one from Hyderabad playing eleven contributed today. SRH lost wickets in quick successions. Therefore they got all out for 153 runs. Resulting in RCB winning their season opener.

RCB’s bowling lineup was in quite a good form today with Yuzvendra Chahal being the pick of the bowler. He bagged 3 wickets to his name. Shivam Dube and Navdeep Saini got 2 wickets apiece. While Dale Steyn picked up the final wicket of Sandeep Sharma.

Man of the Match: Yuzvendra Chahal