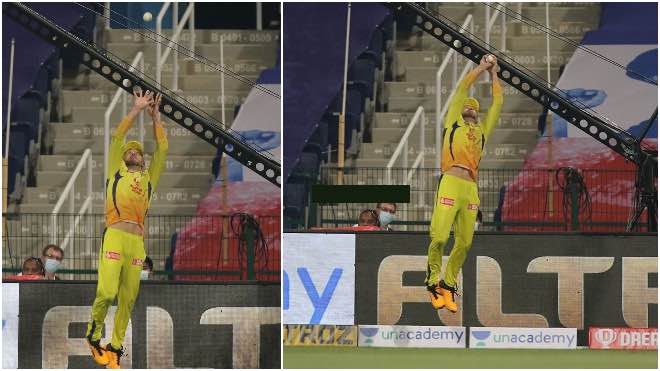 Cricketer Faf du Plessis is indeed a brilliant fielder, furthermore, his first two catches during today’s IPL match between the CSK vs MI captivated the audience. Faf enchanted the viewers with his sportsmanship and exquisite off the ground jump in order to grab the ball.

The first day of the IPL 2020 was nothing less than a delight for the viewers, jam-packed with a lot of excitement and sportsmanship, CSK and the MI  managed to sway their fans in an unforgettable way.

To begin with, when Mumbai lost their captain Rohit Sharma and opener Quinton de Kock late,  the game took a u-turn when the duo- Saurabh Tiwary and Suryakumar Yadav paired up. After Yadav was off the game, Hardik Pandya and Tiwari paired up to proceed with the match. Hardik stunned everyone with his brilliant comeback, and with his powerful batting strokes, he was nothing less than a nightmare to the opponent team. However, the finest fielders in the world Faf du Plessis former South African captain, stole the spotlight when he caught two sensational catches on the boundary off.

Saurabh Tiwary was the first to hit the first six during the IPL 2020, however,  Faf du Plessis ensured to do away with the competition. The South African captain leaped off the ground in order to catch the ball inside the boundary rope.  Moreover, in the same over, Hardik Pandya was also dismissed by the 36-year old with his magnificent catch.

The excitement and the zest of the IPL lovers could not be contained only to the UAE ground, soon after, Twitter was flooded with tweets that applauded Faf du Plessis fielding style and spectacular catches.

Won't you give Faf du Plessis' catch to dismiss Hardik Pandya a 10/10?

In case you might have missed this spectacular match don’t worry. You can watch the recorded show and update yourself by further scrolling the concerned twitter handles of the respective teams that are participating in the IPL 2020.